Microorganisms are the most abundant and diverse form of life on Earth. However, the vast majority of them remain unknown. Indeed, only a small fraction of the microorganisms of our planet can be cultured under traditional conditions, leaving a world of unculturable organisms out of our scope. This is especially true for bacteria thriving under extreme conditions as the harsh conditions are hardly reproducible in a lab. While some microbial studies have been performed in the Sahara, the Atacama, and the Gibson desert, European arid lands remain poorly studied.

To finally explore the microbial community of some European deserts, researchers from the University of Valencia and the Darwin Bioprospecting Excellence, here studied the bacterial diversity of the semi-arid Tabernas Desert. To this aim, the team developed new bacterial culture approaches.

"Culturomics of the Tabernas desert was the ideal crossroad between a rare, poorly studied environment, and the application of simple, yet powerful culturing techniques including long incubation times, diluted media, and careful colony picking", says Dr Manuel Porcar, group leader at the University of Valencia, president of Darwin Bioprospecting Excellence, and last author of the study.

The researchers experimented with different culture methods to find permissive conditions for some unculturable species. Their strategy lied in combining different media, using serial dilutions of the nutrients (up to a hundred times), and extending incubation time (up to a month). In total, 254 bacterial strains were isolated. Most of the species isolated from the concentrated media were previously described as soil inhabitants or species isolated from other deserts. However, 60% of the strains isolated from the highly diluted media are non-identified and possibly new bacteria species. Besides, playing on incubation times also allowed, after a month, to isolate some oligotrophic strains (slow-growing bacteria living under low nutrient conditions) otherwise difficult to growth under lab conditions.

Altogether, this study highlights the potential of simple strategies to obtain higher microbial diversity from natural samples, especially if taken from extreme environments. But the unexploited bacterial biodiversity of the Tabernas Desert could have impacts well beyond ecology and bacteriology:

"We are currently characterising several of the unidentified bacteria, three of them being new Kineococcus species. I am certain that some bacterial strains produce biotechnologically relevant products. It is just a matter to carry out the right screening", says Porcar. 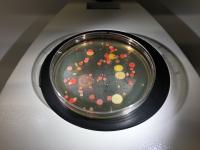