DNA can already tell us the sex and ancestry of unknown individuals, but now an international team of researchers is beginning to connect genetics with facial features, degrees of femininity and racial admixture.

"By jointly modeling sex, genomic ancestry and genotype, the independent effects of particular alleles on facial features can be uncovered," the researchers state today (Mar. 20) in PLOS Genetics. They add that "by simultaneously modeling facial shape variation as a function of sex and genomic ancestry along with genetic markers in craniofacial candidate genes, the effects of sex and ancestry can be removed from the model thereby providing the ability to extract the effects of individual genes."

In essence, by including sex and racial admixture, researchers can learn about how certain genes and their variations influence the shape of the face and its features.

"We use DNA to match to an individual or identify an individual, but you can get so much more from DNA," said Mark D. Shriver, professor of anthropology, Penn State. "Currently we can't go from DNA to a face or from a face to DNA, but it should be possible."

The researchers looked at both actual physical face shape and genetic markers of face shape. They then validated their study by asking individuals to look at faces and determine four things. Is this face male or female? How feminine is it? What proportion of this person is West African? What group would you put this person in, Black African or African-American; White, European or European-American; or Mixed?

To look at the physical face shape, the researchers used populations of mixed West African and European ancestry from the U.S., Brazil and Cape Verde. They placed a grid on 3-D images of the faces of the subjects and measured the spatial coordinates of the grid points. They then used statistical methods to determine the relationship between the variation in the faces and the effects of sex, genomic ancestry and genes that affect the shape of the head and face.

To identify these genes, the researchers looked at known genetic mutations that cause facial and cranial deformation because these genes in their normal variations might also affect the face and head. For example, one gene affects the lips, another changes the shape and configuration of the bones around the eyes, and another influences the shape of the mid face and skull.

The researchers look at the face because it is the most visible part of humans, and characteristics are likely to be influenced by selection. The environment, the local temperatures, rainfall, elevation or other factors in the surroundings may influence certain physical features. Other facial characteristics may be influenced by sexual selection, a recognized or unrecognized preference for a certain look. This changes from group to group and may have no influence on survivability but are instead related to mate choice and contest competition. Both forms of selection will concentrate certain variations in geological areas over time. By looking at groups of mixed ancestry, the researchers can more easily identify the different variations.

"The environment and social environment are major driving factors in changing a whole set of genes that make up how a person looks," said Peter Claes, postdoctoral researcher, research expert in morphometrics, Medical Imaging Research Center, KU Leuven, Belgium and first author on the paper.

Eventually, the researchers think that they might approximate the image of a parent from the DNA of children or better visualize some of Homo sapiens' ancestors by looking at DNA. On a more practical level, law enforcement groups might be able to create a "mug shot" from DNA to identify both victims and criminals. These predictive models fashioned from DNA would be forensically useful. 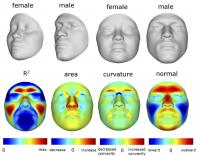 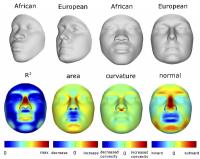