The rise and fall of acid rain is a global experiment whose results are preserved in the geologic record.

By analyzing samples from the Greenland ice sheet, University of Washington atmospheric scientists found clear evidence of the U.S. Clean Air Act. They also discovered a link between air acidity and how nitrogen is preserved in layers of snow, according to a paper published this week in the Proceedings of the National Academy of Sciences.

Forty-five years ago, acid rain was killing fish and dissolving stone monuments on the East Coast. Air pollution rose beginning with the Industrial Revolution and started to improve when the U.S. Clean Air Act of 1970 required coal power plants and other polluters to scrub sulfur out of their smokestacks.

UW researchers began their study of ice cores interested in smog, not acid rain. They discovered a link between the two forms of pollution in the geologic record.

Nitrogen is emitted as a short-lived compound, NOx, which causes ground-level ozone, the main ingredient in smog, and relates to compounds that are the "detergent" of the atmosphere. Sources of NOx include smokestacks and vehicle tailpipes, as well as wildfires, soil microbes or reactions triggered by lightning strikes.

Teasing out the sources of NOx through history might tell us about the atmosphere of the past, how methane, ozone and other chemicals change in the atmosphere, and also provide a measure of global human emissions.

"How much the nitrate concentrations in ice core records can tell about NOx and the chemistry in the past atmosphere is a longstanding question in the ice-core community," said lead author Lei Geng, a UW postdoctoral researcher in atmospheric sciences.

Unlike other gases, short-lived NOx can't be measured directly from air bubbles trapped in ice cores. Within a day or two most of the NOx changes into nitrate, a water-soluble molecule essential to life that gets deposited in soil and snow.

Earlier research by co-author Eric Steig, a UW professor of Earth and space sciences, suggested that comparing amounts of the two stable forms of nitrogen – nitrogen-15 and nitrogen-14 – in nitrate could pinpoint the emission sources of NOx. Ice cores from Greenland and North American lake sediments showed the nitrogen-15 ratio gradually decreasing since 1850, suggesting a corresponding rise in human emissions.

The new research says: not so fast. The detailed measurements of nitrate, NOx and sulfur show the nitrogen isotope ratio leveling off in 1970, and suggests that ratio is sensitive to the same chemicals that cause acid rain.

"This shows that the relationship between emissions and the isotopes is less direct than we thought, and the final signal recorded in the Greenland ice cores is actually not just the nitrogen emission, but the combined effect of sulfur and nitrogen emissions," Steig said.

The ice cores used in the study were collected in 2007 at Summit Station, Greenland. Total amounts of nitrate for each year were measured and calculated at South Dakota State University, where Geng did his doctoral work. The different forms, or isotopes, were measured in UW's IsoLab. Geng's work showed that the long-term decrease in the nitrogen-15 isotope since 1850, and its leveling off in 1970, are linked to changes in air chemistry. Airborne nitrate can exist as a gas or a particle, and nitrate with lighter isotopes tends to exist as a gas. But he found that the total fraction of nitrate present as gas or particle varies with the acidity of the atmosphere, and the acidic air causes more of the light isotopes to exist as a gas.

"The isotope records really closely follow the atmospheric acidity trends," said co-author Becky Alexander, a UW associate professor of atmospheric sciences. "You can really see the effect of the Clean Air Act in 1970, which had the most dramatic impact on emission of acid from coal-fired power plants."

What's more, airborne nitrate dissolves in water and falls at the poles as snow. While that snow sits on the ground, sunlight bouncing off the surface triggers chemical reactions that send some of it back into a gas form. Acid air can also influence the reactivity of nitrate in snow and thus the preservation of nitrate in ice cores.

Other ice core records might also be affected by acidity in air, Alexander said. No effect would be expected for stable gases like carbon dioxide and oxygen, or for the water molecules used to calculate temperature variations through time. But acidity in air could influence deposition and preservation of other volatile compounds such as chlorine, mercury or organic materials in ice cores.

Eventually, better understanding of the air chemistry during formation of the layers could allow researchers to correct for the effect, extracting better information of the past from these compounds in the geologic record.

The research was funded by the National Science Foundation. Other co-authors are Eric Sofen and Andrew Schauer at the UW, Jihong Cole-Dai at South Dakota State University and Joël Savarino at University of Grenoble in France.

Note for reporters: The lead author of the earlier study is Meredith Hastings, now at Brown University. 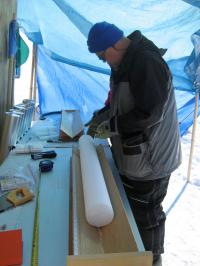