Scientists worry that rising global temperatures accompanied by melting permafrost in arctic regions will initiate the release of underground methane into the atmosphere. Once released, that methane gas would speed up global warming by trapping the Earth's heat radiation about 20 times more efficiently than does the better-known greenhouse gas, carbon dioxide.

An MIT paper appearing in the Journal of Geophysical Research online Aug. 29 elucidates how this underground methane in frozen regions would escape and also concludes that methane trapped under the ocean may already be escaping through vents in the sea floor at a much faster rate than previously believed. Some scientists have associated the release, both gradual and fast, of subsurface ocean methane with climate change of the past and future.

"The sediment conditions under which this mechanism for gas migration dominates, such as when you have a very fine-grained mud, are pervasive in much of the ocean as well as in some permafrost regions," said lead author Ruben Juanes, the ARCO Assistant Professor in Energy Studies in the Department of Civil and Environmental Engineering.

"This indicates that we may be greatly underestimating the methane fluxes presently occurring in the ocean and from underground into Earth's atmosphere," said Juanes. "This could have implications for our understanding of the Earth's carbon cycle and global warming."

Juanes explains that some of the naturally occurring underground methane exists not as gas but as methane hydrate. In the hydrate phase, a methane gas molecule is locked inside a crystalline cage of frozen water molecules. These hydrates exist in a layer of underground rock or oceanic sediments called the hydrate stability zone or HSZ. Methane hydrates will remain stable as long as the external pressure remains high and the temperature low. Beneath the hydrate stability zone, where the temperatures are higher, methane is found primarily in the gas phase mixed with water and sediment.

But the stability of the hydrate stability zone is climate-dependent.

If atmospheric temperatures rise, the hydrate stability zone will shift upward, leaving in its stead a layer of methane gas that has been freed from the hydrate cages. Pressure in that new layer of free gas would build, forcing the gas to shoot up through the HSZ to the surface through existing veins and new fractures in the sediment. A grain-scale computational model developed by Juanes and recent MIT graduate Antone Jain indicates that the gas would tend to open up cornflake-shaped fractures in the sediment, and would flow quickly enough that it could not be trapped into icy hydrate cages en route.

"Previous studies did not take into account the strong interaction between the gas-water surface tension and the sediment mechanics. Our model explains recent experiments of sediment fracturing during gas flow, and predicts that large amounts of free methane gas can bypass the HSZ," said Juanes.

Using their model, as well as seismic data and core samples from a hydrate-bearing area of ocean floor (Hydrate Ridge, off the coast of Oregon), Juanes and Jain found that methane gas is very likely spewing out of vents in the sea floor at flow rates up to 1 million times faster than if it were migrating as a dissolved substance in water making its way through the oceanic sediment — a process previously thought to dominate methane transport.

"Our model provides a physical explanation for the recent striking discovery by the National Oceanic and Atmospheric Administration of a plume 1,400 meters high at the seafloor off the Northern California Margin," said Juanes. This plume, which was recorded for five minutes before disappearing, is believed not to be hydrothermal vent, but a plume of methane gas bubbles coated with methane hydrate.

The Jain and Juanes paper in the Journal of Geophysical Research also explains the short-term consequences of injecting carbon dioxide into the ocean's subsurface, a method proposed by some researchers for reducing atmospheric greenhouse gas. Juanes found that while some of the CO2 would remain trapped as a hydrate, much would likely spew up through fractures just as methane does.

"It is important to keep both methane and carbon dioxide either in the pipeline or underground, because the consequences of escape can be quite dangerous over time," said Juanes.

Massachusetts Institute of Technology, Department of Civil and Environmental Engineering 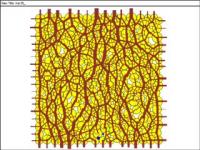