Two NASA satellites provided a look at Tropical Cyclone Kai-Tak when it was moving through the central Philippines and fizzling just west of Palawan in the South China Sea.

On Dec. 16 at 12 a.m. EST (0500 UTC) NASA-NOAA's Suomi NPP satellite passed over Tropical Storm Kai-Tak when it was at tropical storm strength moving through the central Philippines. The Visible Infrared Imaging Radiometer Suite (VIIRS) instrument aboard NASA-NOAA's Suomi NPP satellite captured a visible image of the storm that depicted a somewhat elongated system. The interaction with land areas weakened the storm as it moved west through the Philippine archipelago.

On Dec. 17 at 12:30 p.m. EST (Dec. 18 at 1:30 a.m. local time Philippines), the Moderate Resolution Imaging Spectroradiometer or MODIS instrument aboard NASA's Aqua satellite captured a visible image of Kai-Tak. By that time, Kai-Tak was an amorphous-looking depression that continued to weaken. Kai-Tak was being battered by easterly vertical wind shear that was pushing the clouds and thunderstorms west of the center of circulation.

On Dec. 18 at 4 a.m. EST (0900 UTC) the Joint Typhoon Warning Center (JTWC) issued the final bulletin on Kai-Tak as it was dissipating over the South China Sea, just east of the island of Palawan. Kai-Tak was located near 10.3 degrees north latitude and 118.5 degrees east longitude, about 280 nautical miles south-southwest of Manila, Philippines. Maximum sustained winds dropped to 25 knots (28.7 mph/46.3 kph) and Kai-Tak was moving to the southwest at 7 knots (8 mph/13 kph).

NASA follows a fading Kai-Tak into the South China Sea 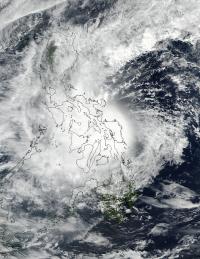