Today's rich variety of beetles may be due to an historically low extinction rate rather than a high rate of new species emerging, according to a new study. These findings were revealed by combing through the fossil record.

"Much of the work to understand why beetles are diverse has really focused on what promotes speciation," says lead author Dena Smith, Curator of Invertebrate Paleontology and Associate Professor of Geological Sciences at the University of Colorado Museum of Natural History. "By looking at the fossil history of the group, we can see that extinction, or rather lack of extinction may be just as important, if not more important, than origination. Perhaps we should be focusing more on why beetles are so resistant to extinction." Smith's study with her coauthor, Jonathan Marcot, Research Assistant Professor of Animal Biology at the University of Illinois, will appear in the Proceedings of the Royal Society B.

To fully explore the evolution of the insect order, Coleoptera, Smith and Marcot used publications that document the fossil record of beetles from international literature as far back as the early 19th century and open access database projects including the EDNA Fossil Insect Database and the Catalogue of Fossil Coleoptera. The team constructed a database of 5,553 beetle species from 221 unique locations. Given the patchy nature of the data at the species level, they performed analyses at the family level and found that the majority of families that are living today also preserved in the fossil record.

The study explores beetles as far back as their origins in the Permian period, 284 million years ago. When compared to the fossil record of other animal groups such as clams, corals, and vertebrates, beetles have among the lowest family-level extinction rates ever calculated. In fact, no known families in the largest beetle subgroup, Polyphaga, go extinct in their evolutionary history. The negligible beetle extinction rate is likely caused by their flexible diets, particularly in the Polyphaga, which include algae, plants, and other animals.

"There are several things about beetles that make them extremely flexible and able to adapt to changing situations," Smith says. She points to beetles' ability to metamorphose--a trait shared by many insects--when considering their environmental flexibility. Soft-bodied larvae vary greatly from winged, exoskeleton-ensconced adults. "This means that they can take advantage of very different types of habitats as a larva and then as an adult," she adds. "Adult beetles can be highly mobile and research that has focused on glacial-interglacial cycles has shown that they can move quickly in response to any climate fluctuations."

The study explores beetles as far back as their origins in the Permian period, 284 million years ago. Both authors emphasize that illustrating such a history would not have been possible without the fossil record--an often underutilized resource in exploring the evolution of insects.

"I think people have been hesitant to jump into studying insect fossils because there has been the misperception that they are so fragile and rarely fossilize," Smith says. "I am hoping that this study demonstrates that the fossil record is quite good and can be used in many ways to study the evolution of this diverse and important group."

Marcot adds, "Not only have these groups gone un-studied, but there are certain things that we can learn from the fossil record that we just can't learn any place else."

Other insect groups might be similar to Coleoptera in terms of their extinction resistance, and Smith hopes that their work will inspire other entomologists to delve into the fossil record of their favorite insect. For now she is actively working to digitize more fossil specimens, paving the way for future studies to be conducted on a finer scale. The project, known as the Fossil Insect Collaborative and funded by the National Science Foundation, is expected to make available more than half a million fossil insect specimens from the major U.S. collections--many with associated images--in a searchable online database.

"Being a curator of a museum collection, I know that there are many species in our cabinets that have not yet been studied and described," Smith says. "Once we are able to bring those specimens out of the cabinets and make them more accessible to the broader research community, I think we will be able to look at species level patterns and other really interested questions about the macroevolutionary history of insect groups." 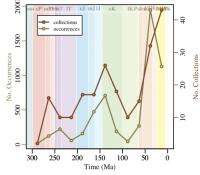