Using tools developed to monitor earthquakes, an interdisciplinary team of researchers reporting in Current Biology on May 7 have found that it's possible to eavesdrop on elephants by listening in to vibrations through the ground as they move about and vocalize. The findings lend support to theories suggesting that elephants could use ground vibrations for long-distance communication among themselves, the researchers say. They might also lead to development of a new kind of alarm system for detecting elephant behaviors, such as panic running, as a means to catch and deter poachers.

"We were surprised by the size of the forces acting on the ground that were generated by elephants when they vocalize," says Beth Mortimer of the Universities of Oxford and Bristol, UK. "We found that the forces generated through elephant calls were comparable to the forces generated by a fast elephant walk. This means that elephant calls can travel significant distances through the ground and, in favorable conditions, further than the distance that calls travel through the air."

Mortimer is generally interested in animals that use vibrations through materials for information. Her earlier studies focused on spiders and their webs. In the new study, she teamed up with geophysicist colleagues including Tarje Nissen-Meyer at the University of Oxford, UK, to look to animals at the other end of the size spectrum. There had been hints that elephants might use ground vibrations to communicate, but their transmission through the ground wasn't well understood.

To explore in the new study, Mortimer and Will Rees, a Masters student in Nissen-Meyer's seismology lab, recorded vibrations generated by wild elephants in Kenya while they displayed different behaviors, including walking and calling. They relied on techniques more commonly used to investigate earth processes, such as earthquakes. Their goal was to learn how far elephant-generated vibrations travel and how they are affected by human-generated noise, terrain type, and other factors.

The findings suggest that human-generated noise may interfere with elephants' ability to communicate through vibrations. They may also have practical implications for helping to keep elephants safe.

"We suggest that monitoring ground-based vibrations can be used in a practical context to not only detect elephants, but determine their behaviors," Mortimer says. "Using multiple seismic recorders in remote locations, we suggest that detection, location, and classification algorithms can be generated that allow monitoring of elephants in real-time."

While more experimental data are needed to confirm the potential over long distances, the findings could lead to the development of seismic monitoring systems to listen in for signs of elephants in trouble.

"We hope to build on these initial findings to develop a comprehensive approach for monitoring and understanding the behavior of large mammals in these pristine, changing, and fragile environments," Nissen-Meyer says.

He says they now plan to deploy a larger, long-term network of seismic sensors along with aerial, visual, and acoustic instruments to examine elephants' reactions when researchers echo their own recorded signals back to them.

Could seismology equipment help to protect elephants from poachers? 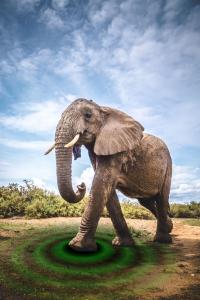 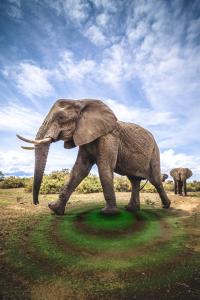