A newly discovered miniature trap jaw ant from the evergreen tropical forests of Ecuador bears the curious Latin name Strumigenys ayersthey, among hundreds, which are also named in honour of people, but end with -ae (after females) and -i (after males). This makes the newly described ant perhaps the only species in the world to have a scientific name with the suffix -they, thus celebrating gender diversity.

The insect was first found by Philipp Hoenle of the Technical University of Darmstadt, Germany, during a cooperative investigation of the Reserva Río Canandé in 2018. The reserve belongs to the NGO Jocotoco, and preserves a small part of the highly threatened biodiversity hotspots called the Chocó.

Hoenle reached out to taxonomic expert Douglas Booher of Yale University. Soon, Booher responded with excitement that this species was unlike any other of the 850+ species belonging to its genus. As a result, the team described the previously unknown to science species and its remarkable trap-jaw morphology in a research paper, published in the peer-reviewed, open-access journal ZooKeys.

Curiously, it was no other but lead singer and lyricist of the American alternative rock band R.E.M. Michael Stipe that joined Booher in the writing of the etymology section for the research article. This is the part in the publication, where they honor their mutual friend, activist and artist Jeremy Ayers and explain the origin of the species name.

"In contrast to the traditional naming practices that identify individuals as one of two distinct genders, we have chosen a non-Latinized portmanteau honoring the artist Jeremy Ayers and representing people that do not identify with conventional binary gender assignments - Strumigenys ayersthey". "The 'they' recognizes non-binary gender identifiers in order to reflect recent evolution in English pronoun use - 'they, them, their' and address a more inclusive and expansive understanding of gender identification."

Current nomenclature practice on how to name animal species after people only differentiates between male and female personal names, offering respectively the ending -ae for a woman or -i for a man.

The research team additionally propose that the -they suffix can be used for singular honorific names of non-binary identifiers.

When asked about the choice of a name for the ant, Booher said: "Such a beautiful and rare animal was just the species to celebrate both biological and human diversity. Small changes in language have had a large impact on culture. Language is dynamic and so should be the change in naming species - a basic language of science".

With their choice, the team invites the scientific community to keep pace with the likes of Oxford English Dictionary, Merriam-Webster Unabridged Dictionary and HSBC Bank, who have also adapted their own institutional practices, language usage and recognition to represent gender diversity.

"The discovery of such an unusual rare ant highlights the importance of scientific exploration and conservation of the Chocó region in Ecuador, which is at the same time one of the most biodiverse and threatened areas on our planet," the researchers add in conclusion.

Strumigenys ayersthey can be distinguished by its predominantly smooth and shining cuticle surface and long trap-jaw mandibles, which make it unique among nearly a thousand species of its genus. The researchers haven't been able to obtain more specimens of the species, which suggests that it's rare. 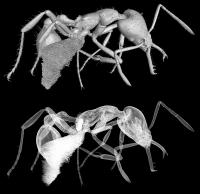