It has long been thought that the brain size of anthropoid primates--a diverse group of modern and extinct monkeys, humans, and their nearest kin--progressively increased over time. New research on one of the oldest and most complete fossil primate skulls from South America shows instead that the pattern of brain evolution in this group was far more checkered. The study, published today in the journal Science Advances and led by researchers from the American Museum of Natural History, the Chinese Academy of Sciences, and the University of California Santa Barbara, suggests that the brain enlarged repeatedly and independently over the course of anthropoid history, and was more complex in some early members of the group than previously recognized.

"Human beings have exceptionally enlarged brains, but we know very little about how far back this key trait started to develop," said lead author Xijun Ni, a research associate at the Museum and a researcher at the Chinese Academy of Sciences. "This is in part because of the scarcity of well-preserved fossil skulls of much more ancient relatives."

As part of a long-term collaboration with John Flynn, the Museum's Frick Curator of Fossil Mammals, Ni spearheaded a detailed study of an exceptional 20-million-year-old anthropoid fossil discovered high in the Andes mountains of Chile, the skull and only known specimen of Chilecebus carrascoensis.

"Through more than three decades of partnership and close collaboration with the National Museum of Chile, we have recovered many remarkable new fossils from unexpected places in the rugged volcanic terrain of the Andes," Flynn said. "Chilecebus is one of those rare and truly spectacular fossils, revealing new insights and surprising conclusions every time new analytical methods are applied to studying it."

Previous research by Flynn, Ni, and their colleagues on Chilecebus provided a rough idea of the animal's encephalization, or the brain size relative to body size. A high encephalization quotient (EQ) signifies a large brain for an animal of a given body size. Most primates have high EQs relative to other mammals, although some primates--especially humans and their closest relatives--have even higher EQs than others. The latest study takes this understanding one step further, illustrating the patterns across the broader anthropoid family tree. The resulting "PEQ"--or phylogenetic encephalization quotient, to correct for the effects of close evolutionary relationships--for Chilecebus is relatively small, at 0.79. Most living monkeys, by comparison, have PEQs ranging from 0.86 to 3.39, with humans coming in at an extraordinary 13.46 and having expanded brain sizes dramatically even compared to nearest relatives. With this new framework, the researchers confirmed that cerebral enlargement occurred repeatedly and independently in anthropoid evolution, in both New and Old World lineages, with occasional decreases in size.

High-resolution x-ray computed tomography (CT) scanning and 3D digital reconstruction of the inside of Chilecebus' skull gave the research team new insights into the anatomy of its brain. In modern primates, the size of the visual and olfactory centers in the brain are negatively correlated, reflecting a potential evolutionary "trade-off," meaning that visually acute primates typically have weaker senses of smell. Surprisingly, the researchers discovered that a small olfactory bulb in Chilecebus was not counterbalanced by an amplified visual system. This finding indicates that in primate evolution the visual and olfactory systems were far less tightly coupled than was widely assumed.

Other findings: The size of the opening for the optic nerve suggests that Chilecebus was diurnal. Also, the infolding (sulcus) pattern of the brain of Chilecebus, although far simpler than in most modern anthropoids, possesses at least seven pairs of sulcal grooves and is surprisingly complex for such an ancient primate.

"During his epic voyage on the Beagle, Charles Darwin explored the mouth of the canyon where Chilecebus was discovered 160 years later. Shut out of the higher cordillera by winter snow, Darwin was inspired by 'scenes of the highest interest' his vista presented. This exquisite fossil, found just a few kilometers east of where Darwin stood, would have thrilled him," said co-author André Wyss from the University of California Santa Barbara.

This project was carried out through long-standing partnerships with the Museo Nacional de Historia Natural (Chile), Universidad de Chile, and Consejo Nacional de Monumentos Naturales (Chile), and it was funded in part by the Chinese Academy of Sciences, the National Natural Science Foundation of China, the U.S. National Science Foundation (Grant no. DEB-9317943, DEB-0317014, DEB-0513476, DEB-9020213, and DEB-9318126), and a John S. Guggenheim Memorial Foundation Fellowship.

Chi Zhang, an expert in computational evolutionary analyses from the Chinese Academy of Sciences, is also an author on this paper.

The American Museum of Natural History, founded in 1869 and currently celebrating its 150 anniversary, is one of the world's preeminent scientific, educational, and cultural institutions. The Museum encompasses 45 permanent exhibition halls, including those in the Rose Center for Earth and Space and the Hayden Planetarium, as well as galleries for temporary exhibitions. It is home to the Theodore Roosevelt Memorial, New York State's official memorial to its 33rd governor and the nation's 26th president, and a tribute to Roosevelt's enduring legacy of conservation. The Museum's five active research divisions and three cross-disciplinary centers support approximately 200 scientists, whose work draws on a world-class permanent collection of more than 34 million specimens and artifacts, as well as on specialized collections for frozen tissue and genomic and astrophysical data and on one of the largest natural history libraries in the world. Through its Richard Gilder Graduate School, it is the only American museum authorized to grant the Ph.D. degree and also to grant the Master of Arts in Teaching degree. Annual visitation has grown to approximately 5 million, and the Museum's exhibitions and Space Shows are seen by millions more in venues on six continents. The Museum's website, mobile apps, and massive open online courses (MOOCs) extend its scientific research and collections, exhibitions, and educational programs to additional audiences around the globe. Visit amnh.org for more information. 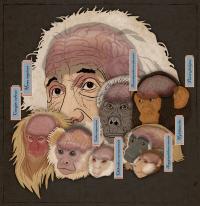