Researchers report an association between China's live poultry trade and avian influenza spread. The highly pathogenic avian influenza virus (HP AIV) H5N1 has spread to more than 60 countries since its identification in 1996, with an estimated 50-60% fatality rate in humans. Most H5N1 cases are linked to exposure to live poultry, which are thought to play a key role in transmission. Huaiyu Tian, Oliver Pybus, Nils Stenseth, and colleagues compared the structure of live poultry trade networks in China with genome sequences of H5N1 and two related AIV lineages from domestic poultry to estimate the role of poultry trading in virus transmission. Movement of virus lineages tended to occur between nearby provinces, suggesting a geographically continuous process of virus transmission. The intensity of poultry trade between provinces was a significant predictor of virus spread. The authors identified five regional live poultry trade communities (LPTCs) within China and used viral genome sequences to reconstruct the evolutionary history of each viral lineage. Clades within each lineage tended to coincide with specific LPTCs, and movement between LPTCs was often associated with major evolutionary divergences. Lineage transmission was much more likely to occur within LPTCs than between LPTCs. The results suggest a strong association between virus transmission and the live poultry trade network in China and could inform prevention and control efforts, according to the authors. 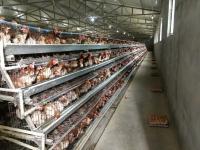