New Caledonian crows may understand how to displace water to receive a reward, with the causal understanding level of a 5-7 year-old child, according to results published March 26, 2014, in the open access journal PLOS ONE by Sarah Jelbert from University of Auckland and colleagues.

Understanding causal relationships between actions is a key feature of human cognition. However, the extent to which non-human animals are capable of understanding causal relationships is not well understood. Scientists used the Aesop's fable riddle— in which subjects drop stones into water to raise the water level and obtain an out-of reach-reward—to assess New Caledonian crows' causal understanding of water displacement. These crows are known for their intelligence and innovation, as they are the only non-primate species able to make tools, such as prodding sticks and hooks. Six wild crows were tested after a brief training period for six experiments, during which the authors noted rapid learning (although not all the crows completed every experiment). The authors note that these tasks did not test insightful problem solving, but were directed at the birds' understanding of volume displacement.

Crows completed 4 of 6 water displacement tasks, including preferentially dropping stones into a water-filled tube instead of a sand-filled tube, dropping sinking objects rather than floating objects, using solid objects rather than hollow objects, and dropping objects into a tube with a high water level rather than a low one. However, they failed two more challenging tasks, one that required understanding of the width of the tube, and one that required understanding of counterintuitive cues for a U-shaped displacement task. According to the authors, results indicate crows may possess a sophisticated—but incomplete—understanding of the causal properties of volume displacement, rivalling that of 5-7 year old children.

Sarah Jelbert added, "These results are striking as they highlight both the strengths and limits of the crows' understanding. In particular, the crows all failed a task which violated normal causal rules, but they could pass the other tasks, which suggests they were using some level of causal understanding when they were successful."

Financial Disclosure: This work was supported by a grant from the New Zealand Marsden Fund (RDG) and a University of Auckland Doctoral Scholarship (SAJ). The funders had no role in study design, data collection and analysis, decision to publish, or preparation of the manuscript.

PLEASE LINK TO THE SCIENTIFIC ARTICLE IN ONLINE VERSIONS OF YOUR REPORT (URL goes live after the embargo ends): http://dx.plos.org/10.1371/journal.pone.0092895 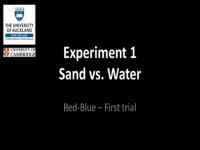 Example Trials for Each of the 6 Experiments