Cardiff/Halle/S./Bern. The number of bee colonies in Central Europe has decreased over recent decades. In fact, the number of beekeepers has been declining in the whole of Europe since 1985. This is the result of a study that has now been published by the International Bee Research Association, which for the first time has provided an overview of the problem of bee colony decline at the European level. Until now there had only been the reports from individual countries available. As other pollinators such as wild bees and hoverflies are also in decline, this could be a potential danger for pollinator services, on which many arable crops depend, according to what an international team of scientists have written in a special edition of the Journal of Apicultural Research.

In their investigation the researchers analysed data that was available from national beekeeper magazines and national reports, in order to calculate the total number of bee colonies and beekeepers. In this way the number of bee colonies between 1965 and 1985 could be reconstructed for 14 European countries and for 18 European countries between 1985 and 2005. The compilation provides us with a preliminary overview of the situation in Europe. It is not complete however, since for example France, Spain and some Eastern European EU countries are missing from it, as no suitable data could be procured for them. While in Europe and the USA the number of bee colonies has declined, the number on a worldwide scale is thought to have increased by approximately 45 percent over the last 50 years according to a 2009 report from the Food and Agricultural Organization of the United Nations (FAO). Unfortunately however this finding is of little use to the agrarian economy in Europe and the USA, for although honey can be imported as a product of the bees, this is not the case for the service provided by the bees – namely pollination.

According to the analysis, the number of bee colonies has already been on the decline in Central and Western Europe since 1965. Since 1985 this trend has also become apparent in countries such as the Czech Republic, Norway, the Slovak Republic and Sweden. By comparison, in the South of Europe (Greece, Italy and Portugal) the number of bee colonies increased between 1965 and 2005. In contrast however, the number of beekeepers decreased in all of the countries that were investigated. Scientists assume the cause for this to be the social and economic changes over recent decades. Rising incomes of the rural population made other sugar-based products affordable, the replacement of jobs by machines in agriculture speeded up the rural exodus to urban regions and thus beekeeping as a hobby lost its attractiveness. "The price of treating bee diseases has increased to the extent that the cost of treatments may equal or exceed the income from a colony for an entire year, thus making it uneconomic to keep bees on a small scale", explains Dr. Simon G. Potts of the University of Reading in England. "Moreover, the effort for treating disease, in particular V. destructor, has probably also reduced the attractiveness of beekeeping as a hobby."

Through the investigation, the mystery of bee losses has by no means been solved, emphasize the scientists, who were however able to add another piece to the puzzle. Furthermore, the data would have to be interpreted very carefully because of the very different evaluation methods in individual countries. "With the limited evidence available it is neither possible to identify the actual driver of honey bee losses in Europe nor to give a complete answer on the trends for colonies and beekeepers. This obviously creates an urgent demand for a standardization of evaluation methods, especially on colony numbers. Such harmonized reliable methods will be the obvious backbone for any research to understand and mitigate honey bee colony losses", adds Dr. Josef Settele from the Helmholtz Centre for Environmental Research (UFZ).

The loss of pollinators such as bees, bumble bees and butterflies is one of the four pillars of the EU project ALARM. ALARM stands for "Assessing Large scale environmental Risks for biodiversity with tested Methods" and was the largest research project of the European Union in the field of biodiversity. Over 200 scientists from 35 countries and 68 partner organizations (of which seven were companies) worked on this comprehensive research project between 2004 and 2009, which was coordinated by Josef Settele from the UFZ together with six other colleagues. ALARM was not only one of the largest EU research projects but also one of the most productive: The funding of this project resulted in more than 1000 scientific publications until now.

The United Nations have declared 2010 as the "International Year of Biodiversity". The goal of this is to bring the issue of biodiversity with its many facets to the collective conscience of the public. With its expertise the UFZ contributes to investigating the consequences and causes of the loss of biodiversity as well as developing mitigation options. For more information see: http://www.ufz.de/index.php?de=16034 and http://www.ufz.de/data/ufz_spezial_april08_20080325_WEB8411.pdf

Biodiversity research in Germany is conducted at numerous institutions ranging from universities, non-university research institutes and departmental research to nature conservation organisations and companies. The Network Forum on Biodiversity Research is a project in the context of DIVERSITAS Germany that intends to offer the research community a common institution-independent communication structure and culture. For more information see: http://www.biodiversity.de/

Wild Bees and the Flowers They Pollinate Are Declining in Europe (07 September, 2006): http://ec.europa.eu/environment/integration/research/newsalert/pdf/33na3.pdf

At the Helmholtz Centre for Environmental Research (UFZ) scientists research the causes and consequences of far-reaching environmental changes. They study water resources, biological diversity, the consequences of climate change and adaptation possibilities, environmental and biotechnologies, bio energy, the behaviour of chemicals in the environment and their effect on health, as well as modelling and social science issues. Their guiding research principle is supporting the sustainable use of natural resources and helping to secure these basic requirements of life over the long term under the influence of global change. The UFZ employs 930 people at its sites in Leipzig, Halle and Magdeburg. It is funded by the German government and by the states of Saxony and Saxony-Anhalt.

The Helmholtz Association helps solve major, pressing challenges facing society, science and the economy with top scientific achievements in six research areas: Energy, Earth and Environment, Health, Key Technologies, Structure of Matter, Transport and Space. With 28,000 employees in 16 research centres and an annual budget of around EUR 2.8 billion, the Helmholtz Association is Germany's largest scientific organisation. Its work follows in the tradition of the great natural scientist Hermann von Helmholtz (1821-1894). 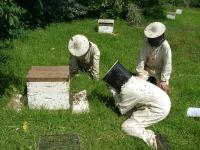