An expedition to Mount Everest by Italian researchers has shown for the first time that blood pressure monitored over a 24-hour period rises progressively as people climb to higher altitudes. The researchers also found that while a drug used for lowering blood pressure, called telmisartan, was effective in counteracting the effects of altitude up to 3400 metres, it was not effective at 5400 metres above sea level – the height of the Everest base camp.

The study is published online today (Wednesday) in the European Heart Journal [1], and its findings have implications not just for people who live, work or undertake recreational activities such as skiing and trekking at high altitudes, but also for people at lower altitudes who may be temporarily deprived of an adequate oxygen supply – a condition known as hypoxia. Hypoxia can lead to altitude sickness at high altitudes, but is also seen at sea level in people who suffer from sleep apnoea when their breathing is temporarily interrupted by a blocked airway.

The participants were randomised to receive either 80 mg of a blood pressure lowering drug, telmisartan, or placebo. Telmisartan is known as an "angiotensin receptor blocker" (ARB) because it blocks the effects of a peptide called angiotensin II, which causes blood vessels to narrow. The researchers collected blood samples as well.

Professor Gianfranco Parati, professor of cardiovascular medicine at the University of Milano-Bicocca and Director of the Cardiology Research Laboratory at the Istituto Auxologico Italiano (Milan, Italy), who led the research, said: "Our study provides the first systematic demonstration that exposure to progressively higher altitudes is associated with a progressive and marked increase in ambulatory blood pressure. The increase occurred immediately after the high altitude was reached, persisted during prolonged altitude exposure, was seen throughout the 24-hour period but was particularly pronounced at night when there was a reduction in the night-time 'dip', and disappeared after return to sea level. After reaching Everest base camp, the effect of high altitude was greater on systolic blood pressure in people aged 50 and over compared with younger people.

"The blood pressure increase seen with exposure to progressively more severe oxygen deprivation at higher altitude among volunteers in the placebo group and in both groups at 5400 metres may have implications for the management of patients with chronic diseases, including chronic heart failure in which breathing is interrupted periodically, acute worsening of chronic obstructive pulmonary disease, obstructive sleep apnoea, and severe obesity. Together, these conditions affect more than 600 million people worldwide, making our results highly significant from a clinical perspective.

"This blood pressure increase is due to several factors, the most important being the effects of oxygen deprivation in increasing activity in the body's sympathetic nervous system. This leads to the heart working harder and the peripheral blood vessels constricting.

"Our paper also provides the first demonstration of the efficacy at high altitude of one of the most common drugs used to treat high blood pressure. The ability of telmisartan in blocking the angiotensin II receptors is preserved during acute exposure to moderately high altitudes up to 3400 metres, but is impaired when people move to the very high altitudes of 5400 metres.

"At a practical level this implies that for people already being treated with angiotensin II receptor blockers such as telmisartan, the treatment will remain effective at altitudes reached by trekkers, climbers, skiers and workers, but will not work at very high altitudes where their blood pressure will probably become uncontrolled more easily.

"Our findings will also enable us to take appropriate action to warn cardiovascular patients of the need for caution whenever they are going to be exposed to high altitudes for leisure or work. In addition, this study emphasises the importance of ambulatory blood pressure monitoring as compared to conventional blood pressure measurements in characterising blood pressure levels in people's real lives; this is particularly important when focusing on the effects of hypoxia, which can be much less evident at rest than during daily life activities."

The Everest expedition, which took place in 2008, is part of a series of expeditions to high altitudes, such as the Alps and the Andes, by the researchers as part of HIGHCARE projects (HIGH altitude CArdiovascular REsearch). In a subsequent study on the Andes they have been looking at the changes in blood pressure of people who live permanently at high levels in the mountains, and at the behaviour of blood pressure in hypertensive subjects living at sea level, who are brought to high altitude for a short period of time. In one of their Alps studies the researchers are focusing on how the cardiovascular system and blood pressure adapts to altitude in workers involved in the construction of the new Mont Blanc cable car from the Italian side. More information on all these projects can be found at: http://www.highcareprojects.eu 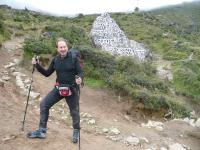 Gianfranco Parati on the Way to Mount Everest base camp

Lab Work in Tents at Mount Everest Base Camp