NASA examined the heavy rainfall generated by Tropical Cyclone Dineo as it made landfall in Mozambique and NASA's Terra satellite spotted the storm's remnants over four countries.

Late on Feb. 15, Dineo made landfall in southern Mozambique. By Feb. 17 the storm weakened to a remnant low pressure area when NASA's Terra satellite passed overhead. The Moderate Resolution Imaging Spectroradiometer or MODIS instrument aboard Terra captured a visible image that showed the center of the low pressure area over Zimbabwe and clouds extended over found Dineo's clouds stretched over southern Mozambique, Swaziland, eastern Botswana and northeastern South Africa.

The Global Precipitation Measurement mission or GPM core observatory satellite flew over Mozambique on February 16, 2016 at (4:16 a.m. EST) 0916 UTC after Dineo's maximum sustained winds had fallen to about 60 knots (69 mph) and the storm continued moving inland.

Data collected by GPM's Microwave Imager (GMI) and Dual-Frequency Precipitation Radar (DPR) instruments showed that the tropical cyclone was still dropping light to moderate rainfall over a large area of southern Mozambique. This GPM view revealed that some of the most intense rain bands from Dineo had moved over Swaziland and northeastern South Africa. GPM found that a few powerful storms over Swaziland were dropping precipitation at a rate of over 86 mm (3.4 inches) per hour.

The GPM core observatory satellite's radar (DPR Ku Band) were used to create a 3-D structure of rainfall within Tropical Cyclone Dineo. Storm top heights were reaching heights above 16 km (9.9 miles) before the tropical cyclone came ashore in Mozambique. The tallest storm top heights in rain bands over Swaziland were shown by GPM's radar to reach heights of about 13.6 km (8.4 miles). GPM is a joint mission between NASA and the Japanese space agency JAXA.

The low pressure area is expected to continue weakening as it moves further inland. 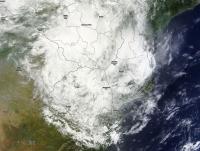 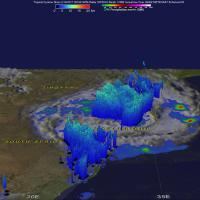