BIRMINGHAM, Ala. - Researchers have grown heart tissue by seeding a mix of human cells onto a 1-micron-resolution scaffold made with a 3-D printer. The cells organized themselves in the scaffold to create engineered heart tissue that beats synchronously in culture. When the human-derived heart muscle patch was surgically placed onto a mouse heart after a heart attack, it significantly improved heart function and decreased the amount of dead heart tissue.

"Our novel technique is the first to achieve resolution of 1 micrometer or less," the researchers reported in the journal Circulation Research. This tissue engineering advance is an important step toward the goal of preventing heart failure after a heart attack. Such heart failures account for nearly half of the 7.3 million worldwide heart disease-related deaths each year.

The heart cannot regenerate muscle tissue after a heart attack has killed part of the muscle wall. That dead tissue can strain surrounding muscle, leading to a lethal heart enlargement. It has long been the dream of heart experts to create new tissue that could replace damaged muscle and protect the heart from dilatation after a heart attack.

The researchers, led by Jianyi "Jay" Zhang, M.D., Ph.D., the University of Alabama at Birmingham, and Brenda Ogle, Ph.D., the University of Minnesota, modeled the scaffold after a three-dimensional scan of the extracellular matrix of a piece of mouse myocardial tissue. Extracellular matrix is the collection of compounds secreted by cells that gives structural support and cushioning to hold the tissue together.

Using multiphoton three-dimensional printing, the team then created crosslinks among extracellular proteins dissolved in a photoreactive gelatin. When the uncrosslinked gelatin was washed away, the photopolymerized extracellular protein scaffold that remained replicated the shape of the extracellular matrix, with hollows where cells had been.

This native-like scaffold was seeded with a mix of 50,000 cardiomyocytes, smooth muscle cells and endothelial cells derived from human-induced pluripotent stem cells, or hiPSCs. This cardiac muscle patch, about four one-thousandths of an inch thick and eight one-hundredths of an inch square began beating within one day of seeding, and the speed and strength of contractions increased significantly over the next week.

Researchers found that the scaffold had aligned the muscle cells properly, similar to native heart tissue, and the cells showed a smooth wave of electrical signal moving across the patch, a vital part of the electrophysiology that propagates contraction of the heart across the atria or ventricles. It appeared that the native-like structure of the scaffold contributed to the healthy electrical and mechanical function of the cells.

When two of the patches were transplanted onto an infarcted mouse heart, there was significant improvement in measures of cardiac function, blood vessel density and cell proliferation, and reduced infarct size and programmed cell death, or apoptosis.

"Thus, the hiPSC-derived cardiac muscle patches produced for this report may represent an important step toward the clinical use of 3-D-printing technology," Zhang, Ogle and colleagues wrote. They also said, "To our knowledge, this is the first time modulated raster scanning has ever been successfully used to control the fabrication of a tissue-engineered scaffold, and consequently, our results are particularly relevant for applications that require the fibrillar and mesh-like structures present in cardiac tissue."

Zhang is the chair of UAB Biomedical Engineering, a joint department of the UAB School of Medicine and School of Engineering. Ogle is an associate professor of biomedical engineering at Minnesota. 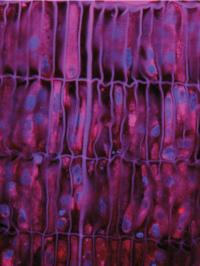