Single electron pumping devices with high efficiency and controllability at room temperature play an essential role in implement spin-based quantum computing and quantum information processing. In a recent study, which was published in SCIENCE CHINA Physics, Mechanics & Astronomy, single-electron transistors (SETs) based on single indium-doped ZnO nanobelt (NB) were built by Xiulai Xu, et al., scientists at the Institute of Physics, Chinese Academy of Sciences. Clear Coulomb oscillations in the SETs were observed at 4.2 K. Single- and double-electron pumping was also achieved by using a back-gated AC signal for different pumping voltages.

Diluted magnetic semiconductors (DMSs), which possess both magnetic and semiconductor properties, was found that the magnetic properties in host materials could be formed by introducing small portions of magnetic materials and that their optoelectronic transport properties did not concurrently degrade. These researchers stated: "Many DMSs, such as indium-doped Mn5Ge3 and (Ga, Mn)As, have been used for precise spin injection and detection purposes. However, the low Curie temperatures, caused by narrow bandgap, limit their application at room temperature. Therefore, wide bandgap semiconductor materials such as ZnO doped with transition metals are highly desirable."

The doping of transition metals in ZnO can improve its ferromagnetic properties, which are advantageous for future applications in spintronics. Among these ZnO materials, they pointed out, "ZnO nanobelts (NBs) are attractive candidates for optoelectronic and nanoscale electronic applications because of the direct wide bandgap (3.37 eV), high exciton binding energy at room temperature (60 meV), and large surface-to-volume ratio."

In the study, SETs based on single indium-doped ZnO NB were built. Strong Coulomb oscillations were observed at 4.2 K. "Periodic and non-periodic Coulomb diamonds observed were attributed to the presence of single uniform quantum dots and multi-quantum dots, respectively. The charging energy values were 4 and 5 meV in the case of the single and multi-dots systems, respectively, and the corresponding diameters of the quantum dots were approximately 86 and 70 nm," they explained.

Single- and double-electron pumping was also achieved by using a back-gated AC signal for different pumping voltages. The realization of controlled single- and double-electron pumping in ZnO quantum dots with the simplest configuration was a significant step toward understanding the coherent properties of electron spin in quantum dots for future applications.

The results indicate that ZnO NBs are promising candidates for single-electron spin detection, which is useful for quantum computing and quantum information. Furthermore, the simple configuration of the device used in the study will make it more compatible with standard Si technology in the future. 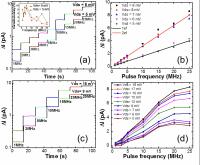