LA PAZ, BOLIVIA (May 22, 2018) -- After a two-and-a-half-year expedition through the world's most biodiverse protected area, the Identidad Madidi explorers have concluded their epic quest of completing a massive biological survey of Madidi National Park, uncovering more than 120 potentially new species of plants, butterflies and vertebrates in the process, according to WCS (Wildlife Conservation Society).

The long journey ended on November 26, 2017 at the glacial base of the Chaupi Orco Andean peak, 6,044 meters above sea level and more than 5,850 meters above the Amazonian lowlands. Along with the objective of using the altitudinal transect to confirm Madidi National Park's status as the world's most biologically diverse terrestrial protected area, Identidad Madidi accomplished another goal by forging a meaningful connection between the people of Bolivia and its natural heritage through an educational campaign, as well as traditional and social media.

"We have accomplished everything we hoped for and more on this journey of science and discovery," said Dr. Robert Wallace, WCS's Director of the Greater Madidi-Tambopata Landscape and leader of the Identidad Madidi expedition. "The massive amounts of images and data collected on the expedition will provide us with the baseline information needed to protect this natural wonder for future generations of Bolivians and the world."

Over the past 30 months, the Bolivian scientific team for Identidad Madidi traveled to all of Madidi's ecosystems, including: the mid-montane grasslands and gallery forest at Machariapo; the dry montane forests at Sipia; the mountainous puna at Laguna Celeste; the treeline elfin forests at Tigremachay; the Amazonian forest at Alto Madidi; the Andean foothill or piedmont forests at Rio Hondo; the humid montane or cloud forests at different elevations at Mamacona, Cargadero, Isañoj, Sarayoj and Chullo, and others.

Prior to the launch, WCS scientists spent considerable effort systematizing all existing vertebrate and butterfly records within the limits of the Madidi protected area. A similar effort was initiated by the National Herbarium, the Missouri Botanical Garden and WCS to compile a comprehensive list of confirmed plant species.

These baselines allow Identidad Madidi researchers to measure the impact of the fieldwork across the 15 study sites. In addition to species known to exist in the landscape, the team added 1,382 species and subspecies to the Madidi landscape lists, including 100 mammals, 41 birds, 27 reptiles, 25 amphibians, 138 fish, 611 butterflies (species and subspecies) and 440 plants. Over 200 of these new records were also new for Bolivia, and incredibly a whopping 124 of the new records are candidate new species for science, including 84 plants, 5 butterflies, 19 fish, 8 amphibians, 4 reptiles and 4 mammals, as well as 8 candidate new butterfly subspecies for science. The scientific team are now busy developing the scientific manuscripts to describe these candidate new species.

The Identidad Madidi effort has pushed Madidi ahead of its nearest competitors for the title of the world's most biologically diverse protected area with 265 mammals, 1,028 birds, 105 reptiles, 109 amphibians, at least 314 fish, 5,515 plants and 1,544 butterfly species and subspecies confirmed so far within the park. Scientists assert that these numbers confirm Madidi as the protected area with the most recorded plant, butterfly, bird and mammal species in the world and, for the moment, the second most amphibian and reptile species.

In addition to exploring the Madidi landscape, the scientists are sharing their discoveries with Bolivians to raise awareness and build pride in Bolivia's natural heritage. In coordination with the Ministry of Education, they visited almost half of schools in La Paz and El Alto, as well as most of the schools near the Madidi protected area, to educate students on biodiversity, protected areas and indigenous territories.

Identidad Madidi has generated more than 300 press publications in Bolivia and beyond, and has generated a faithful social media audience through an innovative campaign to share images and biodiversity science with 90,000 followers on social media, especially Facebook, where more than 400 posts have reached the entire Bolivian Facebook audience (more than 2 million people).

"The comments from both social media followers and schoolchildren suggest Bolivia is falling in love with Madidi," said Lilian Painter, WCS´s Bolivia Country Program Director. "Instilling a love of biodiversity in the leaders of tomorrow is perhaps one of the most important legacies of Identidad Madidi."

In recognition of these efforts over the last two years, Identidad Madidi has received three prizes from the Bolivian government, in 2015 a special recognition from the Bolivian Protected Area Service (SERNAP), in 2017 a Science and Technology Prize from the Ministry of Education, as well as the Galardon Chuquiago Marka from the Parliamentary Brigade of La Paz. Identidad Madidi will continue the communication efforts through 2018 and is currently seeking support to continue field efforts to reveal yet more of Madidi´s incredible secrets.

Participating institutions include the Ministry of the Environment and Water, the Bolivian National Park Service, the Vice Ministry of Science and Technology, Madidi National Park, the Bolivian Biodiversity Network, WCS, the Institute of Ecology, Bolivian National Herbarium, Bolivian Faunal Collection, National Natural History Museum, Alcides DÓrbigny Natural History Museum and Armonia with funding from the Gordon and Betty Moore Foundation and WCS. Thirty Bolivian scientists and communicators have participated on the trips, and the team has been accompanied by a number of local guides for every trip.

MISSION: WCS saves wildlife and wild places worldwide through science, conservation action, education, and inspiring people to value nature. VISION: WCS envisions a world where wildlife thrives in healthy lands and seas, valued by societies that embrace and benefit from the diversity and integrity of life on earth. To achieve our mission, WCS, based at the Bronx Zoo, harnesses the power of its Global Conservation Program in more than 60 nations and in all the world's oceans and its five wildlife parks in New York City, visited by 4 million people annually. WCS combines its expertise in the field, zoos, and aquarium to achieve its conservation mission. Visit: http://www.wcs.org; http://www.facebook.com/TheWCS; http://www.youtube.com/user/WCSMedia Follow: @thewcs. 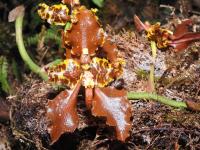 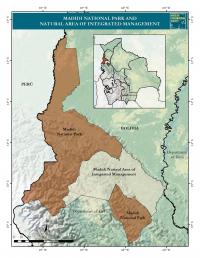