At the south pole of Jupiter lurks a striking sight--even for a gas giant planet covered in colorful bands that sports a red spot larger than the earth. Down near the south pole of the planet, mostly hidden from the prying eyes of humans, is a collection of swirling storms arranged in an unusually geometric pattern.

Since they were first spotted by NASA's Juno space probe in 2019, the storms have presented something of a mystery to scientists. The storms are analogous to hurricanes on Earth. However, on our planet, hurricanes do not gather themselves at the poles and twirl around each other in the shape of a pentagon or hexagon, as do Jupiter's curious storms.

Now, a research team working in the lab of Andy Ingersoll, Caltech professor of planetary science, has discovered why Jupiter's storms behave so strangely. They did so using math derived from a proof written by Lord Kelvin, a British mathematical physicist and engineer, nearly 150 years ago.

Ingersoll, who was a member of the Juno team, says Jupiter's storms are remarkably similar to the ones that lash the East Coast of the United States every summer and fall, just on a much larger scale.

"If you went below the cloud tops, you would probably find liquid water rain drops, hail, and snow," he says. "The winds would be hurricane-force winds. Hurricanes on Earth are a good analog of the individual vortices within these arrangements we see on Jupiter, but there is nothing so stunningly beautiful here."

As on Earth, Jupiter's storms tend to form closer to the equator and then drift toward the poles. However, Earth's hurricanes and typhoons dissipate before they venture too far from the equator. Jupiter's just keep going until they reach the poles.

"The difference is that on the earth hurricanes run out of warm water and they run into continents," Ingersoll says. Jupiter has no land, "so there's much less friction because there's nothing to rub against. There's just more gas under the clouds. Jupiter also has heat left over from its formation that is comparable to the heat it gets from the sun, so the temperature difference between its equator and its poles is not as great as it is on Earth."

However, Ingersoll says, this explanation still does not account for the behavior of the storms once they reach Jupiter's south pole, which is unusual even compared to other gas giants. Saturn, which is also a gas giant, has one enormous storm at each of its poles, rather than a geometrically arranged collection of storms.

The answer to the mystery of why Jupiter has these geometric formations and other planets do not, Ingersoll and his colleagues discovered, could be found in the past, specifically in work conducted in 1878 by Alfred Mayer, an American physicist and Lord Kelvin. Mayer had placed floating circular magnets in a pool of water and observed that they would spontaneously arrange themselves into geometric configurations, similar to those seen on Jupiter, with shapes that depended on the number of magnets. Kelvin used Mayer's observations to develop a mathematical model to explain the magnets' behavior.

"Back in the 19th century, people were thinking about how spinning pieces of fluid would arrange themselves into polygons," Ingersoll says. "Although there were lots of laboratory studies of these fluid polygons, no one had thought of applying that to a planetary surface."

To do so, the research team used a set of equations known as the shallow-water equations to build a computer model of what might be happening on Jupiter, and began to run simulations.

"We wanted to explore the combination of parameters that makes these cyclones stable," says Cheng Li (Phd '17), lead author and 51 Pegasi b postdoctoral fellow at UC Berkeley. "There are established theories that predict that cyclones tend to merge at the pole due to the rotation of the planet and so we found in the initial trial runs."

Eventually, however, the team found that a Jupiter-like stable geometric arrangement of storms would form if the storms were each surrounded by a ring of winds that turned in the opposite direction from the spinning storms, or a so-called anticyclonic ring. The presence of anticyclonic rings causes the storms to repel each other, rather than merge.

"Other planets provide a much wider range of behaviors than what you see on Earth," he says, "so you study the weather on other planets in order to stress-test your theories."

The paper, titled, "Modeling the Stability of Polygonal Patterns of Vortices at the Poles of Jupiter as Revealed by the Juno Spacecraft," appears in the September 8 Issue of the Proceedings of the National Academy of Sciences. Co-authors are Cheng Li of UC Berkeley, and Harriet Brettle (MS '19) and undergraduate student Alexandra Klipfel, both of Caltech.

Solving the strange storms on Jupiter 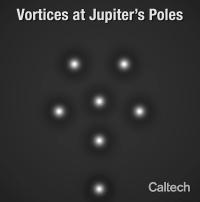 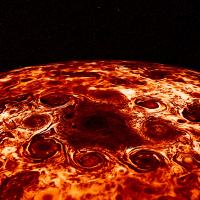