Four NASA spacecraft have observed magnetic reconnection in a turbulent region of the Earth's outer atmosphere known as the magnetosheath, the planet's first line of defense against the intensity of the solar wind. The new insights could help us understand how such phenomena affect Earth's atmosphere because of the potential impact on astronauts in space, satellites and electrical power industries.

Frequent flyers know a thing or two about turbulence--the jarring, sometimes-terrifying change in air currents that can make you think your plane has been put into a giant spin cycle.

Turbulence happens in space, too, in the plasma that surrounds our planet and fills much of what looks like the void beyond.

But amazing things happen when turbulence occurs in magnetic fields, such as those that wrap around Planet Earth. In an article published Wednesday in Nature, researchers including University of Delaware Professor Michael Shay report on surprising new information from NASA's Magnetospheric Multiscale (MMS) mission. The MMS was launched from the Cape Canaveral Air Force Station Space Launch Complex on March 12, 2015.

The MMS was commissioned to study magnetic reconnection, a common event throughout the universe that occurs when magnetic fields change by connecting and then breaking apart. In the magnetic fields that hug Earth--a region known as the magnetosphere--scientists have been able to observe the process and the jet streams of ionized hydrogen atoms that shoot off from it.

It's important to understand how such phenomena affect Earth's atmosphere because of the potential impact on astronauts in space, satellites and electrical power industries as well as the radio communications, GPS devices and other systems that depend on them.

The new insights could help us understand properties of the universe far beyond our planet.

Shay has been studying magnetic reconnection in turbulence for NASA and helped Tai Phan, lead author of the Nature article, analyze the MMS data he collected.

"The turbulence in the magnetosheath contains a lot of magnetic energy," said Phan, senior fellow in the Space Sciences Laboratory at the University of California at Berkeley. "People have been debating how this energy is dissipated and magnetic reconnection is one of the possible processes."

The energy comes directly from the sun's corona, a blazing hot environment that shoots particles out in all directions at speeds around 1 million miles per hour. This is the forceful solar wind. When its power hits the magnetosheath, waves of plasma chaos roll through it.

Scientists don't know yet how all of that turbulent energy is dissipated.

But this new discovery--electron magnetic reconnection--may help them learn more.

The MMS mission has four spacecraft flying in formation about four miles apart, gathering data as they go. Its array of instruments gave researchers one of their first opportunities to search for reconnection in the magnetosheath.

This has never been recognized before, partly because no instruments could capture the process.

The relative difference in size between the electrons and the ions is similar to the difference between ball bearings and basketballs, Shay said. The electrons are harder to spot. And they are moving much faster--40 times faster, he said.

"I had simulated this possible kind of reconnection," Shay said. "But no one had ever observed it happening in space."

The magnetosheath reconnection was too fast and too tiny for the MMS instruments to capture in the usual way, but researchers developed a new way of using one of the instruments--the Fast Plasma Investigation--that gave them the perspective they needed to see what was going on.

"The key event of the paper happens in 45 milliseconds," said Amy Rager, a graduate student at Catholic University of America in Washington, D.C., who worked on the technique at NASA's Goddard Space Flight Center. "This would be one data point with the regular data, but instead we can get six to seven data points in that region with this method, allowing us to understand what is happening."

Also among the co-authors of the paper were two members of Shay's research group--postdoctoral researcher Colby Haggerty and graduate student Prayash Sharma Pyakurel.

The analysis could reveal many more surprises as scientists continue to explore the data MMS has sent.

"MMS has taken us to a whole new level," Shay said. "It's like knowing about atoms and then finding out about even tinier parts like the nucleus or the electrons. People were not expecting it." 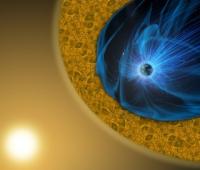 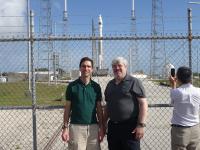