Duke University bioengineers have developed a simple and inexpensive method for loading cancer drug payloads into nano-scale delivery vehicles and demonstrated in animal models that this new nanoformulation can eliminate tumors after a single treatment. After delivering the drug to the tumor, the delivery vehicle breaks down into harmless byproducts, markedly decreasing the toxicity for the recipient.

Nano-delivery systems have become increasingly attractive to researchers because of their ability to efficiently get into tumors. Since blood vessels supplying tumors are more porous, or leaky, than normal vessels, the nanoformulation can more easily enter and accumulate within tumor cells. This means that higher doses of the drug can be delivered, increasing its cancer-killing abilities while decreasing the side effects associated with systematic chemotherapy

"When used to deliver anti-cancer medications in our models, the new formulation has a four-fold higher maximum tolerated dose than the same drug by itself, and it induced nearly complete tumor regression after one injection," said Ashutosh Chilkoti, Theo Pilkington Professor of Biomedical Engineering at Duke's Pratt School of Engineering. "The free drug had only a modest effect in shrinking tumors or in prolonging animal survival".

The results of Chilkoti's experiments were published early online in the journal Nature Materials.

"Just as importantly, we believe, is the novel method we developed to create these drugs," Chilkoti said. "Unlike other approaches, we can produce large quantities simply and inexpensively, and we believe the new method theoretically could be used to improve the effectiveness of other existing cancer drugs."

Central to the new method is how the drug is "attached" to its polypeptide delivery system and whether or not a drug can be dissolved in water.

The delivery system makes use of the bacterium Escherichia coli (E. coli) which has been genetically altered to produce a specific artificial polypeptide known as a chimeric polypeptide. Since E. coli are commonly used to produce proteins, it makes for a simple and reliable production plant for these specific polypeptides with high yield.

When attached to one of these chimeric polypeptides, the drug takes on characteristics that the drug alone does not possess. Most drugs do not dissolve in water, which limits their ability to be taken in by cells. But being attached to a nanoparticle makes the drug soluble.

"When these two elements are combined in a container, they spontaneously self-assemble into a water-soluble nanoparticle," Chilkoti said. "They also self-assemble consistently and reliably in a size of 50 nanometers or so that makes them ideal for cancer therapy. Since many chemotherapeutic drugs are insoluble, we believe that this new approach could work for them as well."

The latest experiments involved doxorubicin, a commonly used agent for the treatment of cancers of the blood, breast, ovaries and other organs. The researchers injected mice with tumors implanted under their skin with either the chimeric polypeptide-doxorubicin combination or doxorubicin alone.

The mice treated with doxorubicin alone had an average tumor size 25 times greater than those treated with the new combination. The average survival time for the doxorubicin-treated mice was 27 days, compared to more than 66 days for mice getting the new formulation.

The Duke researchers now plan to test the new combination on different types of cancer, as well as tumors growing within different organs. They will also try combining these chimeric polypeptides with other insoluble drugs and test their effectiveness against tumors.

The research was supported by the National Institutes of Health. Other Duke team members were Mingnan Chen, Jonathan McDaniel, Wenge Liu, J. Andrew Simnick, and J. Andrew MacKay, now at the University of Southern California. 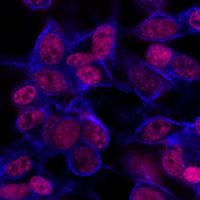