On Feb. 15 and 16, the GPM or Global Precipitation Measurement core observatory satellite had good views of Tropical Cyclone Uriah in the South Indian Ocean west of Australia. On February 15, 2016 at 1706 UTC (12:06 EST) GPM flew directly over the center of the tropical cyclone and measured rainfall in a well-defined circulation. GPM's Dual-frequency Precipitation Radar (DPR) instrument discovered that rain was falling at a rate of over 127 mm (5 inches) per hour in a band of intense storms south of the cyclone's center.

When GPM's Radar sliced through tropical storm URIAH on February 15, 2016 it also found that the intense convective thunderstorms moving around the southwestern side of the tropical cyclone were reaching heights above 16 km (9.9 miles).

GPM once again flew over the intensifying tropical cyclone On February 16, 2016 at 0621 UTC when sustained winds had increased to about 55 knot (63 mph). Uriah continued to intensify and later in the day had winds estimated at over 75 knots (86mph) making it a category one hurricane on the Saffir-Simpson hurricane wind scale. At that time GPM saw rain was falling at a rate of over 50 mm (2 inches) per hour in a band of intense storms south of Tropical Cyclone Uriah's center. The Global Precipitation Measurement or GPM core observatory satellite is co-managed by both NASA and the Japan Aerospace Exploration Agency.

On Feb 17 at 04:50 UTC (Feb. 16 at 11:50 p.m. EST) the Moderate Resolution Imaging Spectroradiometer or MODIS instrument aboard NASA's Terra satellite captured a visible image of Tropical Cyclone Uriah as it continued to approach peak. The MODIS image showed a 19 nautical mile-wide eye with powerful, high thunderstorms circling. Bands of thunderstorms wrapped into the low-level center from the eastern and southern quadrants. 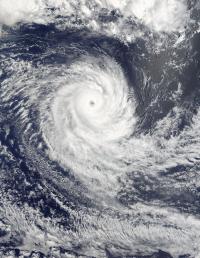 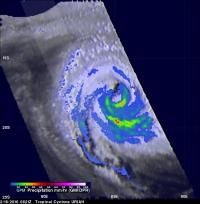