A new elegant orchid species that grows on rocks in deciduous forests of the Pacific slope of Oaxaca state, Mexico, has finally put an end to a long standing dispute among taxonomists. 'Sheltered' under the name of a close relative, the plant has been proved by a research team, led by Dr. Leopardi-Verde, to be different enough for a species of its own. Its distinct features, including shape, size and colors, are discussed and published in the open-access journal PhytoKeys.

When scientists Drs. Carlos L. Leopardi-Verde, Universidad de Colima and Centro de Investigacion Cientifica de Yucatan, German Carnevali and Gustavo A. Romero-Gonzalez, both affiliated with Centro de Investigacion Cientifica de Yucatan and Harvard University Herbaria, stumbled across a beautiful orchid in bloom, they found themselves so surprised by its unique colors and forms that later on they chose the specific epithet inopinatus, meaning "unexpected".

One of the most distinctive characters of the new plant is the yellow labellum patterned with crimson to reddish brown lines. Typically for its species complex, this orchid's leaves are wide and leatherlike and the flowers are relatively large, showy, and leathery to fleshy-leathery petals and sepals. The color of the flowers varies from bronze-green with dark purple lines near the base to pale pink and creamy white splashed with reddish-brown spots and lines towards the top.

The plant is between 30 and 42 cm tall, while together with its flowers it reaches between 80 and 90 cm. Each branch of the inflorescence bears from 3 to 8 flowers, which bloom between March and July. Having been recorded only from a few sites on the Pacific slope of Oaxaca state, Mexico, the species appears to be rare.

The authors explain the similarities between the new species and its close relatives. They also discuss the long-held confusion about its taxonomic placement. As a result of the study, a hypothesis about hybridization that has played a role in the evolution and origin of the novelty has been refuted. 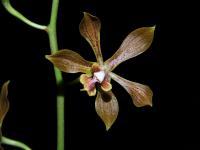