An international team led by researchers from the Xinjiang Institute of Ecology and Geography (XIEG) of the Chinese Academy of Sciences and the University of Geneva has found that flash floods may triple across the Earth's "Third Pole" in response to ongoing climate change.

Their findings were published in Nature Climate Change on May 6.

The Hindu Kush-Himalaya, Tibetan Plateau and surrounding mountain ranges are widely known as the "Third Pole" of the Earth. It contains the largest number of glaciers outside the polar regions.

Due to global warming, the widespread and accelerated melting of glaciers over most of the Third Pole is causing rapid expansion and formation of glacial lakes. When water is suddenly released from these lakes through dam failure or overtopping, glacial lake outburst floods occur, posing a severe threat to downstream communities.

Despite the severe threat these extreme events pose for sustainable mountain development across the Third Pole, scientists are uncertain where and when such events are likely to occur.

In this study, the researchers focused on the threat from new lakes forming in front of rapidly retreating glaciers. They used satellite imagery and topographic modeling to establish the risk associated with about 7,000 glacial lakes now located across the Third Pole.

They found that one in six (1,203) of current glacial lakes pose a high to very high risk to downstream communities, most notably in the eastern and central Himalayan regions of China, India, Nepal, and Bhutan.

The researchers also systematically investigated past outburst flood events and hoped to find some patterns from them. Meanwhile, they used these events to validate their approaches. "We found that these approaches allowed us to accurately classify 96% of glacial lakes known to have produced floods in the past as high or very high risk. We can then apply them to future scenarios," said ZHENG Guoxiong from XIEG, one of the co-first authors of the study.

Under the highest emission scenario (sometimes referred to as the "business-as-usual" scenario), the study shows that much of the Third Pole may approach peak risk for glacial lake flooding by the end of the 21st century--or even by the middle of the century in some regions.

In addition to larger potential flood volumes resulting from the expansion of more than 13,000 lakes in the coming years, over time the lakes will grow closer to steep, unstable mountain slopes that may crash into lakes and provoke small tsunamis.

If global warming continues on its current path, the number of lakes classified as high or very high risk will increase from 1,203 to 2,963, with new risk hotspots emerging in the western Himalaya, Karakorum and parts of Central Asia. These regions have experienced glacial lake outburst floods before, but they have tended to be repetitive and linked to advancing glaciers.

"Such disasters are sudden and highly destructive. Regular monitoring and assessment as well as early warning systems are important to prevent these floods," said Prof. BAO Anming from XIEG, a corresponding author of the study. "We hope this study will motivate relevant nations and the international community to work together to prevent future flood disasters in the Third Pole". 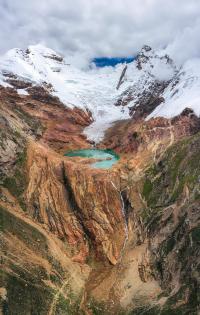 Glacial lake in the Himalayan region