One of the busiest work stations on the International Space Station got a major upgrade recently, and it already has saved dozens of hours on a variety of experiments for crew members aboard the orbiting laboratory.

The Microgravity Science Glovebox (MSG) is a sealed and enclosed work area installed in the U.S. Destiny lab on the space station, and is about the size of a 70-gallon fish tank. Because the reduced gravity environment on the station has a unique effect on chemistry, physics and biology, the sealed glovebox allows astronauts to safely perform experiments without worrying about contamination of either the sample or the rest of the station. The glovebox is designed to contain potentially hazardous chemicals or particles, and allow crew members to use glove ports cut into the sides and front window to work with those experiments.

Previously, astronauts accessing and installing those scientific payloads fed the experiments' hardware through the glove ports -- which are only about 6 inches in diameter -- or through the larger 16-inch windows on the sides.

Then, NASA's most experienced astronaut made an important change. Peggy Whitson has spent the most time working with the glovebox since it was installed on the station in 2002. In January 2017, she removed the large front window that was affixed to the glovebox and replaced it with a new frame and window that can be unlatched and removed in seconds - giving the astronauts easy access to the relatively spacious interior of the glovebox.

"It is an awesome enhancement," said Lee Jordan, Microgravity Science Glovebox project manager at NASA's Marshall Space Flight Center in Huntsville, Alabama. "Access to the box was somewhat constrained and scientists had to learn to break up their payloads into segments that could fit through the ports. This makes for easier installation and we can accommodate larger payloads."

A true, universal workspace, the glovebox facility has logged more than 33,000 hours of activity and was put on the station so scientists on Earth didn't have to build their own containment units for each investigation. It is the staging ground for studies into biology, physics, fluid dynamics and even has housed 3-D printers. The power and data ports allow scientists on the ground to easily access their investigations.

The glovebox is a collaborative effort between NASA and the European Space Agency and was originally built by Bradford Engineering in Heerle, Netherlands. Jordan and his team went back to the Dutch company to build this new hatch and the eight latches that lock it into place, maintaining a seal to contain the experiments while allowing safe access for crew members.

Two versions of the window were built. The first was installed on a duplicate of the glovebox called an engineering unit, located at Marshall called an engineering unit. Marshall personnel put the window through extensive testing before it was approved for delivery to the space station. The second window was then affixed to the engineering unit so project managers had an exact twin of the station's glovebox on the ground. The version on Earth is used to make sure the scientists' experiments work properly with the glovebox on orbit. It also helps scientists design the procedures for the investigations to be installed and operated in the station's glovebox.

With the first exchange and reinstallation of an investigation, the new window has proven its worth.

"One payload in particular took more than four-and-a-half hours to remove from the glovebox with the previous design," said Jordan. "With the new window, it barely took two hours. Saving crew time means they can spend more time on other important experiments on the station. That, in turn, increases the amount of scientific data we can get from orbit, showing a more efficient use of this unique laboratory."

The glovebox has proven so successful that an additional glovebox, modified to study biological sciences, has been built and is being tested to ensure it is ready for flight. It currently is targeted for launch and installation in February 2018, and has the same latched window on the front.

In the meantime, the current glovebox will do more than pull its own weight, providing astronauts with a new window into the scientific discoveries being made in orbit.

New window improves the view of science on orbiting laboratory 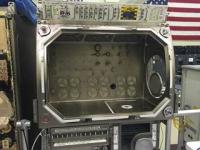