Not much can mess with a lion. They're four-hundred-pound top predators, bringing down large prey like wildebeests, zebras, and even giraffes. But they're not invincible--a new study delves into the interactions between lions and porcupines, and shows how these spiky, cocker spaniel-sized critters can come out on top.

"By examining records of lions that have been injured by porcupines, we were able to develop a better picture of the conditions that lead lions to try to hunt porcupines and what happens to the lions who get stuck," says Julian Kerbis Peterhans, a researcher at the Field Museum, professor at Roosevelt University, and lead author of the new study in the Journal of East African Natural History.

"It's David and Goliath on the African savanna. The powerful king of the savanna tries to eat a juicy, fat porcupine, but he gets hurt by the quills," says co-author Gastone Celesia, a volunteer at the Field and professor emeritus of neurology at Loyola University Chicago. "Even though lions are at the top of the food chain, they get injured if they don't watch what they're doing."

African porcupines are large rodents, weighing about about forty pounds, and predators (including humans) seek them out for their tasty meat. But their backs are covered in sharp quills made of keratin, the same material as hair and fingernails. These quills, which can be a foot long or more, can detach and get stuck in the flesh of predators careless or desperate enough to attack the porcupines.

There are stories and records of lions getting injured by porcupines going back hundreds of years--in June, July, and August of 1656,an official from the Dutch East Company in Cape Town wrote in his diary about three different lions that had been stuck with porcupine quills. In many of these cases, the lions' injuries made it harder for them to hunt or eat. They sometimes turned to easier prey, like cattle or even humans. However, prior to this study, no one had carefully compiled all the records of lions injured by porcupines to better understand the two species' relationship. The team scoured scientific literature, stories in the popular press, and even YouTube videos looking for evidence of lion-porcupine interactions.

"I think that digging deeply into the historic literature, especially very early sources, has largely fallen out of fashion in the modern era," says Tom Gnoske, a co-author of the paper and an assistant collections manager at the Field Museum. "There are treasures still to be found, but going back in the written record four centuries, well, that takes some patience and time."

The team found evidence of about fifty lions that had been injured or killed by porcupines. Several trends appeared to emerge from the data. Lions that lived on harsher, drier terrain seemed to rely more on porcupines for food, at least periodically, perhaps because other prey weren't available. Young lions were more likely to try to hunt porcupines than older lions. And most of the lions injured by porcupines were male.

"There was a tendency for males to be more often wounded or killed by porcupines--sort of a 'young foolish male syndrome,'" says Kerbis Peterhans. To compound matters, young males aren't just taking part in risky behavior, but when they so alone, without other lions to help them if they do get hurt, they are more vulnerable. "In social contexts, a lion can remove porcupine quills with the help of a friend, but this is not possible if they are solitary," he explains.

In addition to piecing together clues about what drives lions to hunt porcupines despite the risk the rodents pose, the researchers were able to use CT scans to more closely examine the effects that porcupine quills have had on lion specimens. The team scanned the skulls of two man-eating lions from 1965. One had been stuck through the nose with a nine-inch quill, and the other had an inch-long segment of a quill embedded in the nerve pulp of its broken canine tooth.

"We were like detectives," says Celesia of the forensic work the team did to better understand the injuries that the lions sustained and figure out what the effects on the lions' hunting abilities would be. "CT scans let us reconstruct what happened in the past."

The scans showed evidence of bone infections that would have impaired both of these lions' ability to eat (or, in the case of the lion with a quill through its nose, to smell its prey)--factors that could have contributed to man-eating. Generally speaking, lions attack humans if something's wrong, like if they're not physically able to take down their usual prey or if they don't have enough space or resources to hunt normally.

Kerbis Peterhans notes the importance of the study in better understanding a condition that leads lions to harm people. "Porcupine injuries are an anticipator of attacks on humans, there's a potential impact on human beings," he says. And the study has broader ecological significance, too. "We know from forty-plus years of continuous behavioral research on lions since the 1960s that lions prefer large hooved animals as prey, including antelope, zebra, and buffalo," says Gnoske. "And our data suggest that by the time the lions are relegated to eating porcupines, there's already a problem with the local food supply. Historic records tell us that when environmental conditions deteriorate, particularly in areas where lions and their preferred prey are already living on the edge, they find themselves in serious trouble with nearby humans or their livestock."

"One moral of the story is that there no free lunch," says Celesia. "Even the king of beasts doesn't eat what he wants without paying a price." 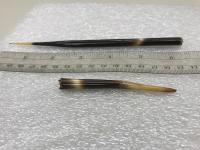