Many animals spend time together in large groups not because they enjoy each other's company, but rather because it lowers their own chances of being eaten should an uninvited guest arrive on the scene—or so the theory goes. Now, researchers who have strapped GPS-enabled backpacks to flocking sheep and a herding dog provide some of the first hard evidence that this "selfish herd theory" is true. The findings appear in the July 24th issue of Current Biology, a Cell Press publication.

"We were able to track the movements of the sheep and the dog that pursued them on a second-by-second basis simultaneously," said Andrew King of The Royal Veterinary College, University of London. "In each case, we found that the sheep exhibit a strong attraction towards the center of the flock as the dog approaches," an effort to avoid the more dangerous fringe.

The selfish herd has long been a favorite explanation for grouping behavior, the researchers say. But tracking the concerted movements of many individual animals at once and predicting a predator's attack is not easy to do. As a result, there had been little semblance of proof.

The data now suggest that individual sheep under threat move continuously toward the center of the flock while the flock as a whole moves away from the threat. "It's kind of continuously folding in on itself," King says. The researchers were able to recreate that folding pattern using simple math.

Some members of the flock do seem to come out better than others, King added. Whether that's a matter of luck or ability the researchers can't yet say, though they are giving the sheep physical fitness and personality tests to look for predictable patterns. They also want to sort out the "rules" the sheep follow in order to move in such a remarkable and orchestrated way.

It turns out the new findings might even shed light on neurodegenerative diseases such as Huntington's, King says, noting that sheep are a popular model for the study of that devastating human condition. "We wanted to establish a baseline of 'normal' sheep social behavior, from which others can pinpoint the onset and progression of abnormal behaviors that may be associated with locomotor or cognitive deficits," King says. 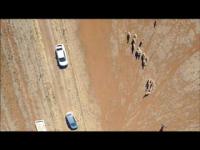 Herding Sheep Really Are Selfish (2 of 2)