WASHINGTON, April 24—A droplet of clear liquid can bend light, acting as a lens. Now, by exploiting this well-known phenomenon, researchers have developed a new process to create inexpensive high quality lenses that will cost less than a penny apiece.

Because they're so inexpensive, the lenses can be used in a variety of applications, including tools to detect diseases in the field, scientific research in the lab and optical lenses and microscopes for education in classrooms.

"What I'm really excited about is that it opens up lens fabrication technology," says Steve Lee from the Research School of Engineering at Australian National University (ANU) of the new technique, which he and his colleagues describe in a paper published today in The Optical Society's (OSA) open-access journal Biomedical Optics Express.

Many conventional lenses are made the same way lenses have been made since the days of Isaac Newton—by grinding and polishing a flat disk of glass into a particular curved shape. Others are made with more modern methods, such as pouring gel-like materials molds. But both approaches can be expensive and complex, Lee says. With the new method, the researchers harvest solid lenses of varying focal lengths by hanging and curing droplets of a gel-like material—a simple and inexpensive approach that avoids costly or complicated machinery.

"What I did was to systematically fine-tune the curvature that's formed by a simple droplet with the help of gravity, and without any molds," he explains.

Although people have long recognized that a droplet can act as a lens, no one tried to see how good a lens it could be. Now, the team has developed a process that pushes this concept to its limits, Lee says.

All that's needed is an oven, a microscope glass slide and a common, gel-like silicone polymer called polydimethylsiloxane (PDMS). First, drop a small amount of PDMS onto the slide. Then bake it at 70 degrees Celsius to harden it, creating a base. Then, drop another dollop of PDMS onto the base and flip the slide over. Gravity pulls the new droplet down into a parabolic shape. Bake the droplet again to solidify the lens. More drops can then be added to hone the shape of the lens that also greatly increases the imaging quality of the lens. "It's a low cost and easy lens-making recipe," Lee says.

The researchers made lenses about a few millimeters thick with a magnification power of 160 times and a resolution of about 4 microns (millionths of a meter)—two times lower in optical resolution than many commercial microscopes, but more than three orders of magnitude lower in cost. "We're quite surprised at the magnification enhancement using such a simple process," he notes.

A 3-D Printed Microscope for $2

Their low cost—low enough to make them disposable—allows for a host of uses, he says. In particular, the researchers have built a lens attachment that turns a smartphone camera into a dermascope, a tool to diagnose skin diseases like melanoma. While normal dermascopes can cost $500 or more, the phone version costs around $2. The new dermascope, which was made using a 3-D printer and is designed for use in rural areas or developing countries, is slated to be commercially available in just a few months, Lee says. A similar smartphone-based tool can also help farmers identify pests out in their fields.

Lee also envisions that the lenses could be used in the lab as implantable lenses that biologists can use to study cells in vivo. The high cost of conventional lenses usually dissuades scientists from implanting them into mice, he says.

The lenses would also be ideal for hobbyists or as part of low cost mobile microscopes that can be distributed to kids and other members of the public for educational or outreach purposes, he adds. "Simple optics can be very powerful."

So far, the researchers can't make lenses much bigger than half an inch in diameter. But to expand the range of applications, the team is now refining the process to make lenses as large as two inches and increasing the lens's optical performance.

Biomedical Optics Express is OSA's principal outlet for serving the biomedical optics community with rapid, open-access, peer-reviewed papers related to optics, photonics and imaging in the life sciences. The journal scope encompasses theoretical modeling and simulations, technology development, and biomedical studies and clinical applications. It is published by The Optical Society and edited by Joseph A. Izatt of Duke University. Biomedical Optics Express is an open-access journal and is available at no cost to readers online at http://www.OpticsInfoBase.org/BOE.

Bake your own droplet lens 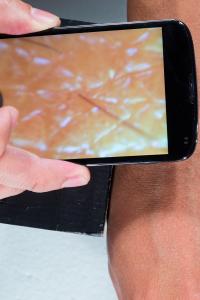