Hacker says the war's dead numbered about 750,000, an estimate that's 20 percent higher than the commonly cited figure of 620,000. His findings will be published in December in the journal Civil War History.

"The traditional estimate has become iconic," Hacker says. "It's been quoted for the last hundred years or more. If you go with that total for a minute — 620,000 — the number of men dying in the Civil War is more than in all other American wars from the American Revolution through the Korean War combined. And consider that the American population in 1860 was about 31 million people, about one-tenth the size it is today. If the war were fought today, the number of deaths would total 6.2 million."

The 620,000 estimate, though widely cited, is also widely understood to be flawed. Neither the Union nor the Confederacy kept standardized personnel records. And the traditional estimate of Confederate war dead —258,000 — was based on incomplete battle reports and a crude guess of deaths from disease and other non-combat causes. Although it is impossible to catalogue the fate of each of the 3 million or more men who fought in the war from 1861-65, some researchers have tried to re-count deaths in selected companies, regiments and areas. But Hacker says these attempts at a direct count will always miss people and therefore always underestimate deaths.

"There are also huge problems estimating mortality with census data," Hacker explains. "You can track the number of people of certain ages from one census to the next, and you can see how many are missing. But the potential problem with that is that each census undercounted people by some unknown amount, and an unknown number of people moved in and out of the country between censuses."

Hacker looked at the ratio of male survival relative to female survival for each age group. He established a "normal" pattern in survival rates for men and women by looking at the numbers for 1850-1860 and 1870-1880. Then he compared the war decade, 1860-1870, relative to the pattern.

"Even if it might not be quite as high as 750,000, I have always been convinced that the consensus figure of 620,000 is too low, and especially that the figure of 260,000 Confederate dead is definitely too low," McPherson says. "My guess is that most of the difference between the estimate of 620,000 and Hacker's higher figure is the result of underreported Confederate deaths."

Like earlier estimates, Hacker's includes men who died in battle as well as soldiers who died as a result of poor conditions in military camps.

"Roughly two out of three men who died in the war died from disease," Hacker says. "The war took men from all over the country and brought them all together into camps that became very filthy very quickly." Deaths resulted from diarrhea, dysentery, measles, typhoid and malaria, among other illnesses.

McPherson says the new figure should gain acceptance among historians of the era.

"An accurate tally — or at least a reasonable estimate — is important in order to gauge the huge impact of the war on American society," he says. "Even if the number of war dead was 'only' 620,000, that still created a huge impact, especially in the South, and a figure of 750,000 makes that impact — and the demographic shadow it threw on the next two generations of Americans — just that much greater." 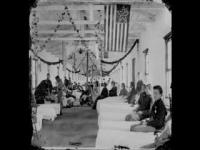