A new species of tiny cave snail that glistens in the light and has a muffin-top-like bulge, was discovered by Marina Ferrand of the French Club Etude et Exploration des Gouffres et Carrie?res (EEGC), during the Phouhin Namno caving expedition in Tham Houey Yè cave in Laos in March 2019. The new species, Laoennea renouardi, is 1.80 mm tall and is named after the French caver, Louis Renouard, who explored and mapped the only two caves in Laos known to harbor this group of tiny snails. Only two species of Laoennea snail are known so far, L. carychioides and now, L. renouardi.

"The discovery and description of biodiversity before it disappears is a major priority for biologists worldwide. The caves in Laos are still largely underexplored and the snails known from them remain few in number," points out Dr. Jochum.

The fact that two species of tiny cave snails of the same group were found in two caves located in two independent karstic networks 3.4 km apart, caused the authors to question evolutionary processes in these underground hotspots of biodiversity. The authors hypothesise that the two caves might have been connected during the Quaternary, around 100-200 thousand years ago. In time, the river Yè might have formed a barrier, thus disconnecting the cave systems and separating the populations. As a result, the snails evolved into two different species. 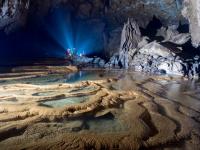