Researchers of Sechenov University together with their colleagues from Australia used the microfluidics technology to develop a device able to isolate cancer cells from urine of patients with prostate cancer. The study showed high sensitivity and specificity of the new method in diagnosing prostate cancer. The results obtained were published in Cancers.

Prostate cancer is the second most common type of cancer among men: in 2018 about 1.27 million new cases were registered, almost 360,000 patients died. It's not easy to gain a significant decrease of mortality rate because there is no practical or accurate enough method of diagnosis able to detect the disease in its early stage.

Nowadays two methods are usually used to prove the diagnosis: the prostate-speci?c antigen (PSA) blood test and the tissue biopsy - taking the tissue samples for analysis. Both of these methods have significant drawbacks. Blood test is not speci?c enough and can produce false positive results since the PSA level rises not only in case of prostate cancer but also during other diseases of the prostate gland. Tissue biopsy is an invasive examination that can cause adverse side e?ects such as local bleeding and infections. Also, as previous studies have shown, the sensitivity of liquid blood biopsy (isolating cancer cells) is rather poor because of the low level of the cells in blood. So, scientists suggest an alternative that is a liquid urine biopsy: the prostate gland is closely connected with the urethra and cancer cells are washed out during urination.

"As we have shown, while testing this technique we managed to collect 85 (±6) % of the total number of prostate cancer cells as well as to isolate cells from the urine of 86% of patients with localised cancer in the early stage. Now we are trying to optimise the method to improve its efficacy, specificity and sensitivity while the technology itself is going through the patent process," said Alexey Rzhevskiy, research associate in the Institute of Molecular Medicine, Sechenov University.

To isolate cells from the liquid, researchers developed a micro?uidic chip - a device made from polymer with a thin spiral channel, forked on one end, and three holes: one for urine intake and two for cell separation. The chip is so designed that cancer cells which are larger than others shift to the inner wall of the channel and leave it through one of the holes while smaller and lighter cells gather along the outer wall and come out through the other hole. This effect is caused by the joint action of several centrifugal forces.

Scientists labelled the collected cells with ?uorescent antibodies - molecules able to glow while absorbing light of a certain wavelength. Researchers examined cancer cells with the antibodies under a fuorescence microscope and measured the intensity of the light emitted: if it exceeded the calculated threshold, scientists concluded that these cells were cancerous.

The authors tested the device using saline with the known number of cells (in pilot studies) and the samples of urine of healthy volunteers and patients with the prostate cancer. During the pilot experiments the chip isolated from 80 to 90% of cancer cells. Tests with the urine samples were rather successful too: they detected the disease in 12 out of 14 patients with cancer and confirmed the health of 11 out of 14 healthy volunteers.

The study was conducted by the scientific group under the leadership of Majid Ebrahimi Warkiani, associate professor in University of Technology Sydney, and Andrei Zvyagin, head of the Department of Biomedical Engineering, Sechenov University.

Chip for liquid biopsy will help to detect prostate cancer 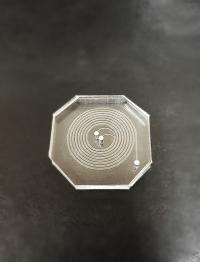