Scientists have shown how earthquakes and storms in the Himalaya can increase the impact of deadly floods in one of Earth's most densely populated areas.

The findings could help researchers improve flood risk maps for the Ganga Plain, a low-lying region covering parts of India, Nepal and Pakistan. They could also provide fresh insight into the long-term impacts of earthquakes and storms in the region.

Until now, little was known about how landslides in the Himalaya could affect flood risk downstream on the Ganga Plain.

For the first time, scientists at the University of Edinburgh have traced the path of rocks washed down from the Himalayan mountains onto the Plain.

They found that large landslides in the southern, lower elevation ranges of the Himalaya are more likely to increase flood risk than those in the high mountains further north.

Rocks in the south are extremely hard and travel only a short distance -- less than 20 km -- to reach the Plain. This means much of this rock -- such as quartzite -- reaches the Plain as gravel or pebbles, which can build up in rivers, altering the natural path of the water, the team says.

Rocks from more northerly regions of the Himalaya tend to be softer, and the team found they often travel at least 100 km to reach the Plain. These types of rock -- including limestone and gneiss - are gradually broken down into sand which, unlike gravel and pebbles, is dispersed widely as it travels downstream.

Understanding whether landslides will produce vast quantities of gravel or sand is crucial for predicting how rivers on the Ganga Plain will be affected, researchers say.

The study is published in the journal Nature. The research was funded by the Natural Environment Research Council.

Elizabeth Dingle, PhD student in the University of Edinburgh's School of GeoSciences, who led the study, said: "Our findings help to explain how events in the Himalaya can have drastic effects on rivers downstream and on the people who live there. Knowing where landslides take place in the mountains could help us better predict whether or not large deposits of gravel will reach the Ganga Plain and increase flood risk." 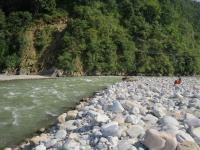