Step aside, charismatic polar bear stranded on a melting iceberg. The springtail may be the new flag bearer of an uncertain Arctic future.

New research from Washington University in St. Louis is tracking how the tiniest Arctic ambassadors are responding to the rapid warming occurring in this region.

Warmer summer and fall seasons and fewer winter freeze-thaw events have led to changes in the relative numbers of different types of bugs in the Arctic, said Amanda Koltz, a postdoctoral fellow in Arts & Sciences. Compared with colder years in the past, there are now more plant-eating and parasitic arthropods, and fewer detritivores (the insects that literally consume the living world's garbage). The research is published in the journal Royal Society Open Science.

The study relies on the longest-standing, most comprehensive data set on Arctic arthropods in the world today: a catalogue of almost 600,000 flies, wasps, spiders and other creepy-crawlies collected at the Zackenberg field station on the northeast coast of Greenland from 1996-2014.

Bugs rule the Arctic. Arthropods make up the majority of animal biomass on the tundra, far outweighing birds or mammals. They have developed all kinds of adaptations to deal with the extreme cold. For example, during the winter at Zackenberg, monthly mean air temperatures are -20 degrees C, but daily minimum temperatures often fall below -30 degrees C. Some of the local bugs are freeze-tolerant, some make antifreeze proteins in their cells, and others simply dessicate themselves so that they don't freeze at all.

"We expect these animals to be adapted to a huge range of temperatures and extreme conditions," Koltz said. But responses to seasonal temperature variation still vary among arthropod groups. As a result, as summers become warmer, the composition of these high-arctic arthropod communities is changing, said Koltz, who conducted this work with collaborators Toke T. Høye and Niels M. Schmidt from Aarhus University in Denmark.

"Twenty years may not be long enough to detect changes in abundances of longer-lived species, like some mammals, but because of their short life spans, it's a pretty long time for arthropods," Koltz said. "Still, the fact that we can detect changes over 20 years in some of these animal groups at such a coarse taxonomic resolution is remarkable."

The changes in community composition were up to five times more extreme in drier rather than wet habitats, suggesting that water availability will play a strong role in what types of bugs will succeed in a warming Arctic.

And with species interactions and food web dynamics in flux, Koltz anticipates more ecosystem-level changes are in store. For example, more herbivorous bugs could mean more consumption pressure for Arctic plants, while the decline in detritivores could result in changes in decomposition and soil nutrient cycling.

"We often don't pay much attention to these small animals, but there could be real consequences to their changing abundances," Koltz said.

Bugged out by climate change 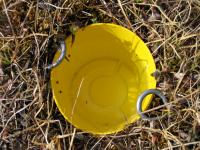