High-definition CT scans of the fossilized skull of a 280 million-year-old fish reveal the origin of chimaeras, a group of cartilaginous fish related to sharks. Analysis of the brain case of Dwykaselachus oosthuizeni, a shark-like fossil from South Africa, shows telltale structures of the brain, major cranial nerves, nostrils and inner ear belonging to modern-day chimaeras.

This discovery, published early online in Nature on Jan. 4, allows scientists to firmly anchor chimaeroids--the last major surviving vertebrate group to be properly situated on the tree of life--in evolutionary history, and sheds light on the early development of these fish as they diverged from their deep, shared ancestry with sharks.

"Chimaeroids belong somewhere close to the sharks and rays, but there's always been uncertainty when you search deeper in time for their evolutionary branching point," said Michael Coates, PhD, professor of organismal biology and anatomy at the University of Chicago, who led the study.

"Chimaeras are unusual throughout the long span of their fossil record," Coates said. "Because of this, it's been difficult to understand how they got to be the way they are in the first place. This discovery sheds new light not only on the early evolution of shark-like fishes, but also on jawed vertebrates as a whole."

Chimaeras include about 50 living species, known in various parts of the world as ratfish, rabbit fish, ghost sharks, St. Joseph sharks or elephant sharks. They represent one of four fundamental divisions of modern vertebrate biodiversity. With large eyes and tooth plates adapted for grinding prey, these deep-water dwelling fish are far from the bloodthirsty killer sharks of Hollywood.

For more than 100 years, they have fascinated biologists. "There are few of the marine animals that on account of structure and relationships to other forms living and extinct have as great interest for zoologists and palaeontologists as the Chimaeroids," wrote Harvard naturalist Samuel Garman in 1904. More than a century later, the relationship between chimaeras, the earliest sharks, and other early jawed fishes in the fossil record continues to puzzle paleontologists.

Chimaeras--named for their similarities to a mythical creature described by Homer as "lion-fronted and snake behind, a goat in the middle"--are unusual. Their anatomy comprises features reminiscent of sharks, ray-finned fishes and tetrapods, and their form is shaped by hardened bits of cartilage rather than bone. Because they are found in deep water, they were long considered rare. But as scientists gained the technology to explore more of the ocean, they are now known to be widespread, but their numbers remain uncertain.

After a 2014 study detailing their extremely slow-evolving genomes was published in Nature, interest in chimaeras blossomed. Of all living vertebrates with jaws, chimaeras seemed to offer the best promise of finding an archive of information about conditions close to the last common ancestor of humans and a Great White.

The Dwykaselachus fossil resolves this issue. It was originally discovered by amateur paleontologist and farmer Roy Oosthuizen when he split open a nodule of rock on his farm in South Africa in the 1980s. An initial description named it based on material visible at the broken surface of the nodule. It was carefully archived in the South African Museum in Cape Town, where its splendor awaited technology able to unwrap its long-shrouded secrets.

In 2013, when the University of the Witwatersrand Evolutionary Studies Institute obtained a micro CT scanner, Dr. Robert Gess, a South African Centre of Excellence in Palaeosciences partner and co-author of this study, began scanning Devonian shark fossils while he was based at the Rhodes University Geology Department. Coates encouraged him to investigate Dwykaselachus.

At the surface, Dwykaselachus appeared to be a symmoriid shark, a bizarre group of 300+ million-year-old sharks, known for their unusual dorsal fin spines, some resembling boom-like prongs and others surreal ironing boards.

CT scans showed that the Dwykaselachus skull was remarkably intact, one of a very few that had not been crushed during fossilization. The scans also provide an unprecedented view of the interior of the brain case.

"When I saw it for the first time, I was stunned," Coates said. "The specimen is remarkable."

The images, one reviewer commented, are "almost dripping with data."

They show a series of telltale anatomical structures that mark the specimen as an early chimaera, not a shark. The braincase preserves details about the brain shape, the paths of major cranial nerves and the anatomy of the inner ear. All of which indicate that Dwyka belongs to modern-day chimaeras. The scans reveal clues about how these fish began to diverge from their common ancestry with sharks.

A large extinction of vertebrates at the end of the Devonian period, about 360 million years ago, gave rise to an explosion of cartilaginous fishes. Instead of what became modern-day sharks, Coates said, revelations from this study indicate that "much of this new biodiversity was, instead, early chimaeras."

"We can now say that the first radiation of cartilaginous fishes after the end Devonian extinction was chimaeras, in abundance." Coates said. "It's the inverse of what we've got today, where sharks are far more common."

The study, "A symmoriiform chondrichthyan braincase and the origin of chimaeroid fishes," was supported by the National Science Foundation, the National Research Foundation (NRF) / Department of Science and Technology South African Centre of Excellence in Palaeosciences, and the NRF African Origins Programme. Additional authors include John Finarelli from the University College Dublin, Ireland, and Katharine Criswell and Kristen Tietjen from the University of Chicago. 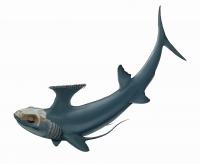