The first detailed, high-resolution 3-D maps of Antarctic sea ice have been developed using an underwater robot. Scientists from the UK, USA and Australia say the new technology provides accurate ice thickness measurements from areas that were previously too difficult to access.

The results, published this week in the journal Nature Geoscience (Monday 24 November 2014), step up the pace of research in the polar regions aimed at understanding the dramatic sea ice changes in the context of climate change.

Scientists use a range of technologies and techniques to measure sea ice thickness. Satellite observations can measure large-scale thickness from space, but interpreting the data accurately can be difficult due to snow cover on the ice. Measurements made on the sea ice by drilling holes, together with visual observations from ships are critical for building a more complete picture, but difficulties in getting access to thicker areas of sea ice leaves gaps in the data. Now, with the Autonomous Underwater Vehicle (AUV) known as SeaBED, scientists have an invaluable new tool to fill this gap.

While most oceanographic survey instruments look down at the seafloor, SeaBED was fitted with an upward-looking sonar in order to measure and map the underside of sea ice floes. The AUV operated at a depth of 20 to 30 meters and was driven in a lawnmower pattern. These lines of data were merged to form high-resolution 3D bathymetric surveys of the underside of the ice.

The yellow SeaBED robot, which is approximately two meters long and weighs nearly 200 kilograms, has a twin-hull design that gives the robot enhanced stability for low-speed photographic surveys.

"Putting an AUV together to map the underside of sea ice is challenging from a software, navigation and acoustic communications standpoint," says Hanumant Singh, an engineering scientist at the Woods Hole Oceanographic Institution (WHOI) whose lab designed, built and operated the AUV.

"SeaBED's maneuverability and stability made it ideal for this application where we were doing detailed floe-scale mapping and deploying, as well as recovering in close-packed ice conditions. It would have been tough to do many of the missions we did, especially under the conditions we encountered, with some of the larger vehicles."

"The full 3-D topography of the underside of the ice provides a richness of new information about the structure of sea ice and the processes that created it. This is key to advancing our models particularly in showing the differences between Arctic and Antarctic sea ice."

Co-author Dr Jeremy Wilkinson from British Antarctic Survey (BAS) says, "The AUV missions have given us a real insight into the nature of Antarctic sea ice - like looking through a microscope. We can now measure ice in far greater detail and were excited to measure ice up to 17 metres thick."

The team deployed AUVs as part of two Antarctic cruises (IceBell and SIPEX-2) in 2010 and 2012 in the austral spring. First on the British Antarctic Survey's RRS James Clark Ross and the second on the Australian icebreaker the RSV Aurora Australis. Three locations around the Antarctic Peninsula were mapped - the Weddell, Bellinghausen and Wilkes Land sectors covering an area of 500,000 square metres, the size of 100 football pitches.

The next steps are for the scientists to do large-scale surveys that can be compared to large-scale observations from aircraft and satellites.

"What this effort does is show that observations from AUVs under the ice are possible and there is a very rich data set that you can get from them," says Ted Maksym, a WHOI scientist and co-author of the paper. "This work is an important step toward making the kinds of routine measurements we need in order to really monitor and understand what's happening with the ice and the large scale changes that are occurring."

Still images and video of the SeaBED and Antarctica are available here: ftp://ftp.nerc-bas.ac.uk/pub/photo/Antarctic_sea_ice/ NB: to download do not use an FTP client, simply open in any web browser (firefox/IE etc) right click on the filename and select 'save target/link/file as' to begin the download or from the Press Offices listed above.

The AUV captured extensive deformation, with the underside revealing large 'rubble fields' of sea ice, suggesting repeated, multi-directional collisions between ice floes through the winter period. This is in contrast to what scientists previously understood from the Arctic, where larger sections of sea ice, under constant pressure, produce longer linear 'ridge' features.

British Antarctic Survey (BAS), an institute of the Natural Environment Research Council (NERC), delivers and enables world-leading interdisciplinary research in the Polar Regions. Its skilled science and support staff based in Cambridge, Antarctica and the Arctic, work together to deliver research that uses the Polar Regions to advance our understanding of Earth as a sustainable planet. Through its extensive logistic capability and know-how BAS facilitates access for the British and international science community to the UK polar research operation. Numerous national and international collaborations, combined with an excellent infrastructure help sustain a world leading position for the UK in Antarctic affairs. For more information visit http://www.antarctica.ac.uk.

The Antarctic Climate & Ecosystems Cooperative Research Centre is a unique collaboration between the Australian Antarctic Division, CSIRO, the University of Tasmania, the Australian Government Department of the Environment, the Australian Bureau of Meteorology, the Alfred Wegener Institute Helmholtz Centre for Polar and Marine Research (Germany), and the National Institute of Water and Atmospheric Research Ltd (New Zealand) plus a consortium of 13 other international participants. The Centre's mission is to understand the crucial role played by Antarctica and the Southern Ocean in global climate, and the impacts of climate change on Australia and the world, and to inform governments, industry, the community and scientists about climate change to guide our future. 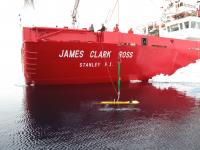