From research into things that are one-billionth of a meter in size, near limitless engineering applications could result. Known as nano-particles, understanding these tiny items could result in new materials and manufacturing models, better energy producing systems, improved or new mechanical systems, enhanced films, fiber optics and other soft materials.

The Structure of Paramagnetic Aggregates from Colloidal Emulsions (InSPACE) series of experiments on the International Space Station explored nano-particles suspended in Magnetorheolocial (MR) fluids--a type of smart fluid that tends to self-assemble into shapes in the presence of a magnetic field. InSPACE research is supported by NASA's Space Life and Physical Sciences Division, which oversees space station research into basic and applied scientific studies in life and physical sciences.

Emerging from the InSPACE-2 investigation are findings that clarify details, confirm facts and sometimes surprise researchers.

When exposed to magnetic fields, MR fluids can transition into a nearly solid-like state. When the magnetic field is removed, the fluids disassemble and buckle. While the disassembling was expected, the buckling was something that surprised Eric Furst, Ph.D, principal investigator and a 20-plus-year veteran of colloidal research.

"We had never seen anything like this buckling in ground-based experiments," said Furst, of the University of Delaware, Newark.

Buckling is seen--and properly designed to avoid--in buildings and mechanical devices. However, this property had not been observed in MR fluids or more generally, in colloidal soft matter systems before now.

"There's a growing interest in buckling phenomena in terms of manipulating, in particular, soft materials," said Furst. "Whether we want to induce bucking or not, I'm not sure. That's the engineering question we have in front of us. What can we do with this really beautiful, physical, fundamental result?"

With the InSPACE experiments, the idea is to understand the fundamental science around directed self-assembly. Researchers hope to better define new methods of manufacturing materials composed of small colloidal or nano-particle building blocks.

"This is a fundamental experiment to develop techniques that could potentially make new materials that cannot be fabricated using conventional methods," said Bob Green, InSPACE project scientist, at NASA's Glenn Research Center in Cleveland. "With directed self-assembly, you can manipulate the structure of a material on a nano-scale in such a way as to form a new material that has unique properties."

The work done on the space station with InSPACE is part of the research effort to understand materials and give us, what Furst calls, the "magical" devices around us.

"Pick up your phone," said Furst. "Pick up the battery in your phone. The glass on your phone. The materials that thing is constructed of are part of the magic that makes this compact, everyday device that gives us access to the Internet and each other wherever we are. It's all that magic."

There may still be plenty of "magic" that comes out of space station research. There's certainly still plenty of information to mine from the InSPACE studies. That work continues as Furst and those who worked on InSPACE delve deeper into the test results. 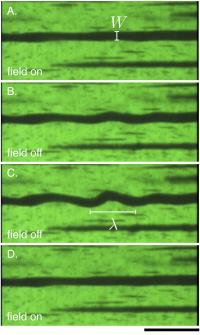