When NASA's Aqua satellite passed over Typhoon Halong on its northern journey through the western North Pacific Ocean, it became wide-eyed again after going through eyewall replacement.

Eyewall replacement happens when the thunderstorms that circle the eye of a powerful hurricane are replaced by other thunderstorms. Basically, a new eye begins to develop around the old eye and it usually indicates a weakening trend.

The Moderate Resolution Imaging Spectroradiometer or MODIS instrument aboard Aqua captured a visible image of Halong on August 6 at 04:30 UTC (12:30 a.m. EDT). The image showed powerful bands of thunderstorms swirling into the center from the northwestern quadrant that wrapped entirely around the cyclone. The image shows the island of Okinawa hundreds of miles north-northwest of Halong's eye.

The day before, August 5, NASA and the Japan Aerospace Exploration Agency's Tropical Rainfall Measuring Mission (TRMM) satellite saw Typhoon Halong on August 5, 2014 at 1550 UTC (11:50 a.m. EDT). Halong was still a strong violent category 2 typhoon with winds of 85 knots (97.8 mph/57.4 kph). Rainfall derived from TRMM's Precipitation Radar instrument revealed that rain was falling at a rate of over 87 mm (about 3.4 inches) per hour south of the Halong's eye.

Also on August 5, subsidence, or sinking air was inhibiting the development of thunderstorms on the northern side. Today, there has been an increase in organization of the eyewall as a band of strong thunderstorms expanded in that northern quadrant.

The Joint Typhoon Warning Center (JTWC) forecasts Halong to track over Minami Daitō Jima by August 7. The Daitō Islands are an archipelago made up of three isolated coral islands southeast of Okinawa. The forecast track from JTWC then carries Halong to a landfall in Shikoku by August 9. Shikoku is the smallest of Japan's four main islands. It is located south of Honshū. All of these areas are under weather advisories. For more information about advisories in Japan, visit the Japan Meteorological Agency's website at: http://www.jma.go.jp/en/warn/. 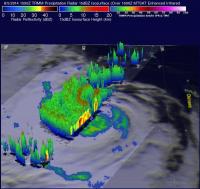