Research led by UK and Australian scientists sheds new light on the role that our ancestors played in the extinction of Australia's prehistoric animals. The study, published this week in the journal Proceedings of the National Academy of Sciences of the USA, provides the first evidence that Tasmania's giant kangaroos and marsupial 'rhinos' and 'leopards' were still roaming the island when humans first arrived. The findings suggest that the mass extinction of Tasmania's large prehistoric animals was the result of human hunting, and not climate change as previously believed.

Scientists have long argued over the reasons behind the worldwide mass extinctions that took place towards the end of the last ice age. The main culprits are generally thought to be climate change or some form of human impact. People only arrived in Tasmania around 43,000 years ago, when the island became temporarily connected by a land bridge to mainland Australia. None of Tasmania's giant animals, known as 'megafauna' were known to have survived until this time. This appeared to clear humans of any involvement in the disappearance of the island's large megafauna.

This new international study reports the discovery of giant kangaroos surviving in Tasmania until people arrived, placing humans back on the list of likely culprits for the subsequent extinction of the megafauna.

Using the latest radiocarbon and luminescence dating techniques, the team were able to determine the age of the fossilised remains of the megafauna more accurately than ever before. The results showed that some of these animals survived until at least 41,000 years ago—much later than previously thought and up to 2,000 years after the first human settlers arrived. As climate in Tasmania was not changing dramatically at this time, the researchers argue that this is evidence of these species being driven to extinction through over-hunting by humans.

Professor Chris Turney of the University of Exeter, lead author of the paper, said: "Ever since Charles Darwin's discovery of giant ground sloth remains in South America, debate has ensued about the cause of early extinction of the world's megafauna. Now, 150 years on from the publication of Darwin's seminal work The Origin of Species, the argument for climate change being the cause of this mass extinction has been seriously undermined. It is sad to know that our ancestors played such a major role in the extinction of these species – and sadder still when we consider that this trend continues today."

The researchers believe that the tale from Tasmania is relevant to many other parts of the world. Given Tasmania's history as an island, these findings should help to disentangle the role of humans and climate change in other island environments, such as Britain. Author Professor Tim Flannery of Macquarie University, Australia, said "Island environments offer an excellent test of competing hypotheses. They typically have a similar megafauna and climate to neighbouring continental landmasses but human arrival was often delayed."

Previous research by Professor Flannery and Professor Bert Roberts of the University of Wollongong, Australia, has shown that 90 per cent of mainland Australia's megafauna disappeared about 46,000 years ago, soon after humans first settled the continent. But humans did not reach Tasmania until a few thousand years later, when the island became connected to the mainland by a land bridge as sea levels fell during the last glaciation. "The Tasmanian results echo those on mainland Australia, putting humans squarely back in the frame as the driving force behind megafaunal extinction", said Professor Roberts.

The most recent discoveries were made serendipitously by cavers exploring a labyrinth of tunnels under the rainforest-clad Mt Cripps in north-west Tasmania. Author Craig Reid at the Queen Victoria Museum and Art Gallery in Tasmania, said "The skeletal remains provide key evidence of Tasmania's final megafauna in the dim, if not-too-distant, past."

The victims of Tasmania's first humans:

The research was supported by The Royal Society and the Australian Research Council. 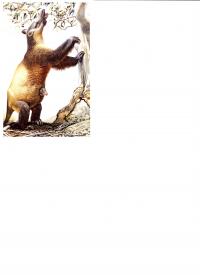