Mitochondrial diseases - which affect 1 in 5,000 people - encompass a spectrum of disorders with an array of symptoms. Many patients with a mitochondrial disease experience neurological symptoms, including intellectual disability, childhood epilepsy and autism spectrum disorder, but why dysfunctional mitochondria - the powerhouses of cells -lead to these sorts of symptoms has been unclear.

In a paper published on March 31 in Cell Reports, investigators from Brigham and Women's Hospital (BWH) shed light on what may be the root cause of these neurological symptoms by tracing the development of interneurons. Interneurons, also known as connector neurons, must migrate long distances during the brain's development, taking a circuitous path to travel from their neural stem cell origins in the ventral forebrain to their location in the dorsal neocortex. The new study indicates that mitochondria, which provide energy for cells, may play a vital role in this migration. Using preclinical models, the team determined that interneurons have higher energetic requirements than other neurons and that properly working mitochondria move about inside interneurons rapidly during migration. When Ant1, a gene known to play a role in mitochondrial disease, was disrupted, mitochondria did not move about in the same patterns and interneurons migrated more slowly and shorter distances.

The new work suggests that correcting epilepsy or reversing other neurological symptoms in patients with mitochondrial diseases will not be as simple as replacing dysfunctional mitochondria at any time. Instead, these symptoms may be the result of brain developmental defects that took place during embryonic development. Further studies will be needed to validate these results in tissue samples from humans.

"We need to rethink how we strategize caring for patients. Historically, patients have been recalcitrant to therapy, and this new work may explain why," said Jeffrey Golden, MD, chair of BWH's Department of Pathology and a co-corresponding author of the study. "This work also provides an insight into rethinking therapeutic strategies."

New insights into the cause of neurological symptoms in mitochondrial diseases 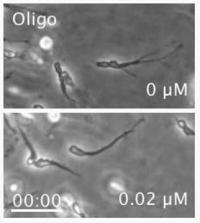