"These results provide the first definitive support that increases in sediment deposited to oceans from river erosion coincide with dramatic changes in glacial cycles," says Utah State University geoscientist Tammy Rittenour. "Our ability to date former river deposits was the game-changing factor in allowing us to pursue this hypothesis."

Rittenour and colleagues from the U.S. Geological Survey, the University of Vermont and Purdue University published findings in the July 20, 2020, issue of Nature Geoscience.

Since rivers do the work of erosion and sediment transport over most of the Earth's surface, scientists have long suggested patterns of global precipitation mimic climate fluctuations.

"If that's the case, enhanced river discharge resulting from intensified global precipitation would increase rates of river erosion," she says.

To test this idea, the team took advantage of the landscape history preserved in the study site's prominent river terraces - ancient river floodplains - perched up to hundreds of meters above the modern Fortymile River, a Yukon River tributary that flows from northwestern Canada to Alaska.

"This 'Rosetta-stone' location, with exposed terraces, provided a long-sought window from which to obtain data," says Rittenour, a Geological Society of America Fellow. "We geochronologists often repeat the adage, 'No Dates, No Rates,' meaning we can't calculate rates of erosion without age control. Using relatively new dating techniques, we were able, for the first time, to establish ages for river deposits that span these key time periods of global climate change."

"OSL dating provides an age estimate of the last time the sediment was exposed to light," she says.

"It's exciting to apply new tools to test foundational ideas that have been only previously speculated," Rittenour says. "These results represent an important step toward understanding the influence of climate in shaping landscapes inhabited by people, and provide clues regarding future landscape response to human activity." 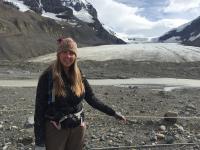