Researchers at the Wellcome Trust Sanger Institute have discovered interacting proteins on the surface of the sperm and the egg essential to begin mammalian life. These proteins, which allow the sperm and egg to recognize one another, offer new paths towards improved fertility treatments and the development of new contraceptives.

Fertilisation occurs when an egg and a sperm recognise each other and fuse together to form an embryo. The Izumo protein displayed on the sperm that recognises the egg was identified in 2005 by Japanese researchers who named it Izumo, after a Japanese marriage shrine, but its mate on the egg has remained a mystery. That is until now.

The team identified a single protein that paired with Izumo and is necessary for fertilisation. The protein is named Juno after the Roman Goddess of fertility and marriage.

"We have solved a long-standing mystery in biology by identifying the molecules displayed on all sperm and egg that must bind each other at the moment we were conceived," says Dr Gavin Wright, senior author from the Sanger Institute. "Without this essential interaction, fertilisation just cannot happen. We may be able to use this discovery to improve fertility treatments and develop new contraceptives."

"The Izumo-Juno pairing is the first known essential interaction for sperm-egg recognition in any organism," says Dr Enrica Bianchi, first author from the Wellcome Trust Sanger Institute. "The binding of the two proteins is very weak, which probably explains why this has remained a mystery until now.

"Previous work in the laboratory led us to expect the interaction to be weak, and this then guided the design of our experiments, and, after a lot of effort, it finally worked."

The team found that after the initial fertilisation step, there is a sudden loss of the Juno protein from the surface of the egg, becoming virtually undetectable after just 40 minutes. This may explain why the egg, once fertilised by the first sperm cell, shuts down its ability to recognise further sperm. This prevents the formation of embryos with more than one sperm cell that would otherwise have too many chromosomes and die.

The team is now screening infertile women to understand whether defects in the Juno receptor are a cause of infertility. If it is, then a simple genetic screening test could help inform the appropriate treatment for women struggling to conceive naturally by reducing the expense and stress often involved in assisted fertility treatments.

This work was supported by the Wellcome Trust

The Wellcome Trust Sanger Institute is one of the world's leading genome centres. Through its ability to conduct research at scale, it is able to engage in bold and long-term exploratory projects that are designed to influence and empower medical science globally. Institute research findings, generated through its own research programmes and through its leading role in international consortia, are being used to develop new diagnostics and treatments for human disease.

The Wellcome Trust is a global charitable foundation dedicated to achieving extraordinary improvements in human and animal health. We support the brightest minds in biomedical research and the medical humanities. Our breadth of support includes public engagement, education and the application of research to improve health. We are independent of both political and commercial interests.

End of Notes to Editors 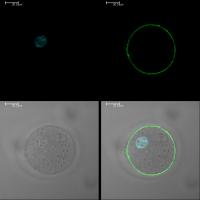 In ICSI File the Green Is Juno, Blue the Pronuclei 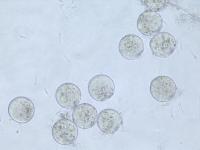