Cold Spring Harbor, NY -- A team of scientists at Cold Spring Harbor Laboratory (CSHL) has identified a set of genes that control stem cell production in tomato. Mutations in these genes explain the origin of mammoth beefsteak tomatoes. More important, the research suggests how breeders can fine-tune fruit size in potentially any fruit-bearing crop. The research appears online today in Nature Genetics.

In its original, wild form the tomato plant produces tiny, berry-sized fruits. Yet among the first tomatoes brought to Europe from Mexico by conquistador Hernan Cortez in the early 16th century were the huge beefsteaks. Producing fruits that often weigh in at over a pound, this variety has long been understood to be a freak of nature, but only now do we know how it came to be.

The secret of the beefsteak tomato, CSHL Associate Professor Zachary Lippman and colleagues show, has to do with the number of stem cells in the plant's growing tip, called the meristem. Specifically, the team traced an abnormal proliferation of stem cells to a naturally occurring mutation that arose hundreds of years ago in a gene called CLAVATA3. Selection for this rare mutant by plant cultivators is the reason we have beefsteak tomatoes today.

The finely tuned balance of stem cell production in plants is controlled by genes that have opposite activities. Specifically, a gene known as WUSCHEL promotes stem cell formation, whereas CLAVATA genes inhibit stem cell production. Several genes in the CLAVATA family encode for receptor proteins that sit on the surface of plant cells -- the equivalent of locks -- as well as a series of proteins that dock at these receptors -- the equivalent of keys. When a CLAVATA key is made and fits in a CLAVATA lock, a signal is sent inside the cell that tells WUSCHEL to slow down. Critically, this prevents WUSCHEL from making too many stem cells.

It is therefore no surprise that when CLAVATA genes are mutated, the plant makes too many stem cells in the meristem. However, in the newly reported experiments, Lippman's team examined never before studied mutant tomato plants, three of which contained faulty genes encoding enzymes that add sugar molecules to proteins. How was this discovery relevant to plant stem cells? Lippman's experiments revealed that the enzymes, called arabinosyltransfersases (ATs), add sugar molecules called arabinoses to CLAVATA3 -- one of the CLAVATA keys. Remarkably, these sugars are required for the key to fit a CLAVATA lock.

The team's important discovery: changing the number of sugars attached to the CLAVATA3 key can change the number of stem cells. Three sugars is normal, and produces normal growth. But when the one or more sugars on the CLAVATA3 key are missing, the key no longer fits properly in the lock. WUSCHEL therefore sends its signal to make new stem cells, but that message is not accompanied by a "stop" signal. There is abnormal growth; the plant's fruit becomes extremely large. Revisiting the original beefsteak tomato variety, Lippman and collaborator Esther van der Knaap at Ohio State University found that the secret of the beefsteak is that not enough of the CLAVATA3 key is made in the meristem. The result is too many stem cells and giant fruits.

The research more broadly shows that there is a continuum of growth possibilities in the tomato plant, and in other plants -- since the CLAVATA pathway is highly conserved in evolution and exists in all plants. By adjusting the number of sugars on CLAVATA keys, and through other mutations affecting components of the pathway, Lippman and colleagues show it is possible to fine-tune growth in ways that could allow breeders to customize fruit size.

Celebrating its 125th anniversary in 2015, Cold Spring Harbor Laboratory has shaped contemporary biomedical research and education with programs in cancer, neuroscience, plant biology and quantitative biology. Home to eight Nobel Prize winners, the private, not-for-profit Laboratory is more than 600 researchers and technicians strong. The Meetings & Courses Program hosts more than 12,000 scientists from around the world each year on its campuses in Long Island and in Suzhou, China. The Laboratory's education arm also includes an academic publishing house, a graduate school and programs for middle and high school students and teachers. For more information, visit http://www.cshl.edu 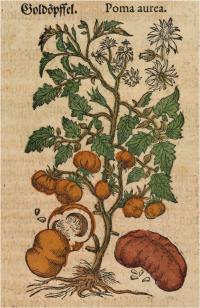