Pea aphids, expert survivors of the insect world, appear to lack major biological defenses, according to the first genetic analysis of their immune system.

"It's surprising," says Emory biologist Nicole Gerardo, who led the study, published this week in Genome Biology. "Aphids have some components of an immune system, but they are missing the genes that we thought were critical to insect immunity."

Pea aphids are major agricultural pests and also important biological models for studies of insect-plant interactions, symbiosis, virus vectoring and genetic plasticity. These resilient insects thrive despite a host of enemies, including parasitic wasps, lady bugs, fungal pathogens and frustrated farmers and gardeners the world over.

The immune-system analysis is among a group of findings being published this month as part of the International Aphid Genomics Consortium, which recently published the full sequence of the pea aphid genome, and sponsored dozens of in-depth analyses of different areas of the sequence. Gerardo served as a project leader for the consortium, in addition to heading the immune system study.

"This is the first look at the genome of a whole group of insects we know little about," says Gerardo, an evolutionary biologist who focuses on host-parasite interactions.

All insects previously sequenced, including flies and bees, belong to a group that undergoes metamorphosis. Pea aphids, however, belong to an insect group known as basel hemimetablous – meaning they are born looking like tiny adults.

"We went into this expecting to find the same set of immune-system genes that we've seen in the genomes of flies, mosquitoes and bees," Gerardo says. "Given these missing genes, it seems that aphids have a weak immune system. Our next step is to figure out how they protect themselves."

One hypothesis is that aphids may compensate for their lack of immune defenses by focusing on reproduction. From birth, a female aphid contains embryos that also contain embryos.

"She is born carrying her granddaughters," Gerardo says. "In a lab, a female aphid can produce up to 20 copies of herself per day. About 10 days later, those babies will start producing their own offspring."

Over 50 million years, aphids have evolved complex relationships with beneficial bacteria that supply them with nutrients or protect them from predators and pathogens. It's possible that the weak immune response in aphids developed as a way to keep from killing off these beneficial microbes, Gerardo says. "A key question is whether these microbes could have changed the aphid genome, or changed how the aphid uses its genes."

Further study of how the aphid immune system interacts with microbes could yield better methods for controlling them in agriculture.

Aphids are not just pests, Gerardo says. They are also potential resources for questions related to human health.

"Humans need beneficial bacteria for proper digestion in the gut and to protect against cavities in the teeth," she says. "Some people feel sick when they take antibiotics because the drug kills off all the beneficial bacteria. If we can study the process of how to keep beneficial bacteria while clearing out harmful bacteria across several organisms, including aphids, we might be able to understand it better."

For more news of the natural and social sciences: www.emory.edu/esciencecommons. 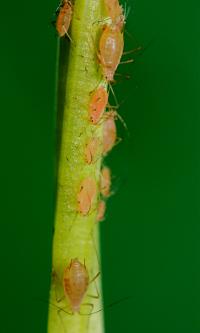