Wild swings in climate and lack of consistently abundant vegetation prevented large plant-eating dinosaurs from dominating tropical regions near the equator for up to 30 million years after they first evolved, according to new research. The multi-year, multi-institutional research study published today in Proceedings of the National Academy of Sciences, pieces together a detailed picture of the climate and ecology during the rise of the dinosaurs 230 million years ago. The findings provide an answer to a persistent mystery among scientists of why only a few small-bodied meat-eating dinosaurs gained a foothold in the tropics during the Late Triassic Period.

Dr. Nate Smith, new curator of the Natural History Museum of Los Angeles County's Dinosaur Institute, joined a team of international scientists -- led by Dr. Jessica Whiteside of the University of Southampton, and co-authors Sofie Lindström, Randall Irmis, Ian Glasspool, Morgan Schaller, Maria Dunlavey, Sterling Nesbitt, and Alan Turner -- to study the Late Triassic environments and ecosystems preserved in the Chinle Formation of northern New Mexico. At a location called Ghost Ranch -- made famous by Georgia O'Keefe's dramatic paintings of its colorful badlands -- the crew collected and analyzed rocks that were deposited in rivers and streams between 205 and 215 million years ago. They found fossilized pollen, spores, charcoal, fish, and reptiles in the ancient sedimentary rocks.

By crushing the rocks and separating the isotopes of carbon using a mass spectrometer, the team uncovered strong changes in the plant and animal life and in the atmosphere. The climate, they found, alternated between wet seasons in some years and droughts in others, and was punctuated by extreme shifts in precipitation in which plant die-offs fueled hotter fires, which in turn killed more plants, damaged soils, and increased erosion. Analysis of the charcoal showed evidence of wildfires that burned at temperatures up to 600 degrees Celsius. The atmosphere in low latitudes was also very high in carbon dioxide -- four to six times modern levels.

Whiteside emphasizes: 'This is the first multi-proxy study of climate and associated faunal change for this ecosystem, containing an extensive vertebrate fossil record. For the first time, we can examine the interplay between climate change and ecosystem evolution at low latitudes, shedding light on what had been a major unresolved aspect of the rise of dinosaurs.'

Fluctuating environments and extreme seasonal shifts would have prevented vegetation from growing and surviving -- and consistently abundant plant life was what Triassic sauropodomorphs, predecessors of the giant Jurassic sauropods like Brachiosaurus, relied on for food. 'These long-necked sauropodomorphs were going like gangbusters at high latitudes during the Late Triassic,' says Smith. 'Sites in Europe and South America contain abundant remains of numerous different species, and yet in over 100 years of collecting, we have no evidence of these dinosaurs from the same time period in the southwestern U.S.' The overall harsh environment (in what would have been a landscape like the arid Western U.S. today) was too unreliable for dinosaur herbivores to establish themselves, the authors say.

The study's findings are supported by the crew's extensive excavations of bones of dinosaurs and other reptiles from the New Mexico site, which shows that the early dinosaurs that populated the tropical, low-latitudes were small, two-legged carnivorous ones and even those species were rare. The animals that flourished were early reptiles and crocodile relatives, such as the long-snouted phytosaurs and armored aetosaurs, which were better able to withstand the wild and severe conditions.

The study's authors say this research will help contribute to an understanding of human-caused climate change. 'In order to put our modern, increasing C02 world in context, we need high-resolution records of how climate change has affected ecosystems in the past,' says Smith. 'Our study suggests that elevated C02 and fluctuating plant diversity could fundamentally reshape vertebrate communities, and may account for the regional differences in dinosaur faunas that persisted for millions of years.'

Smith joins a dedicated team of paleontologists at the Dinosaur Institute of the Natural History Museum, whose productive field programs have resulted in many of the spectacular fossils on display at NHM's award-winning Dinosaur Hall.

The Natural History Museum of Los Angeles County is a national leader in research, exhibitions and education. The Museum was the first dedicated museum building in Los Angeles, opening its doors in 1913. It has amassed one of the world's most extensive and valuable collections of natural and cultural history -- with more than 35 million objects, some as old as 4.5 billion years. For more information, visit the Museum's website at http://www.nhm.org or call 213-763-DINO. 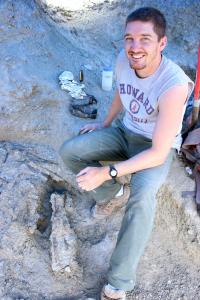