Recent research shows that mild infections without symptoms of illness can still lead to serious consequences by reducing the lifespan of the infected individuals. The study at Lund University in Sweden has been carried out on malaria-infected migratory birds. The infection is thought to speed up the ageing process by shortening the telomeres (i.e., the chromosomes ends) at a faster rate and thereby accelerating senescence.

Until now, the research community had believed that mild infections that do not produce symptoms of illness have no effect on survival and reproduction. However, a new study shows that a malaria infection that produces no obvious direct negative effects still has an impact; in the long run it can have serious consequences in the form of a shortened lifespan.

"If this is a general mechanism for any type of mild, chronic infection, which is quite possible, it will mean our study is of major interest to understand the impact that mild illnesses can have on other organisms, including humans", says Professor Dennis Hasselquist from the Department of Biology, Lund University, one of the researchers behind the study.

According to the researchers, the new study contains a number of very surprising results. Previously, it was thought that a mild infection only produced small, temporary effects that the body could quickly compensate for.

"However, our results show instead that these types of small effects that appear harmless effects could accumulate and speed up the body's ageing process, leading to the earlier death of the individual. This is a new, surprising discovery", says Staffan Bensch, Professor of Biology at Lund University and another of the authors of the study.

The reason why these small effects shorten life in the long run could be a mechanism linked to the chromosomes in the cells of the individual affected. The ends of the chromosomes, known as telomeres, protect the DNA from damage. The longer these chromosome ends are, the greater the chance of living a longer life. The present study shows that a mild malaria infection in birds causes the telomeres to shorten considerably faster in infected individuals as compared with healthy individuals.

"The small, non-measureable effects of the chronic disease appear to underlie the accelerated shortening of the telomeres. When the telomeres get too short, this has a fatal effect and causes premature death", says Dennis Hasselquist.

The researchers have studied malaria in great reed warblers, a species of migratory bird that breeds every summer on Lake Kvismaren near Örebro, Sweden, and spends winters in tropical Africa. Great reed warblers that had chronic malaria, but with an extremely low number of parasites in the blood and without any signs of illness, produced half as many young during their lifetime as birds that were not infected. The size of the broods was the same as for the healthy birds, but because the infected individuals had a shorter lifespan, the total number of young was significantly lower. The infected birds appeared to function just as well in their daily lives as the healthy birds, and could work as hard in their daily life.

"Infected males sang every bit as much as healthy males, i.e. 21 hours a day. Infected females fed their young just as intensively as those that were not infected", says Dennis Hasselquist. 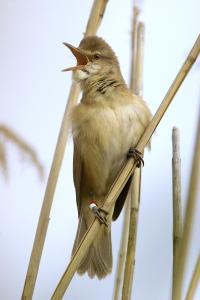