The phrase "a double-edged sword" describes something that is beneficial in some ways but problematic in others. One example is removing maize stover (the husks, stems and leaves of corn plants) from fields. Maize stover is used to make cellulosic ethanol, a renewable biofuel. And renewable biofuels are beneficial to the environment. However, removing the stover can harm the environment because it can cause the soil to erode and lose nutrients.

Taking up this double-edged sword is Cynthia Bartel, a doctoral candidate at Iowa State University. She's finding a way to lessen the harm and increase the benefits of removing maize stover.

"While water and wind erosion are substantial problems for maize stover removal, soil quality preservation is an even greater constraint," she explained. Bartel needed to find a way to remove the stover but preserve the soil quality. So, she turned to previous research for ideas and found that cover or companion crops can improve soil quality. Bartel liked the idea of using cover crops, but was curious about a different type of cover crop.

To explore these questions, the ISU team conducted a field study at two locations in Iowa. In some areas, they planted Kentucky bluegrass with the maize. In other areas, they planted creeping red fescue with the maize. The team closely monitored and analyzed the crops over two years. "The success of the system largely depends on using a compatible species," she explained. And compatibility depends on several factors.

A compatible grass would easily and reliably grow in the area where it is planted. But, it would go dormant in the summer during corn's growing season. The team discovered that the older grass varieties originally selected for the project failed to establish. In addition, the modern grass varieties stayed green too long. Not finding a perfect match on the first try didn't deter the researchers though. "We identified key challenges in varietal selection to ensure that further research efforts are focused effectively," Bartel explained.

In addition to compatibility, Bartel studied the grasses' impacts on the maize. She found that the maize crops did produce less grain in the first year. However, in the second year, the normal control maize and the maize with grass had similar yields. Plus, the grass didn't negatively impact the quality of the stover in the second year or the quantity of the stover in either year. "Ultimately, there may be some yield penalty for perennial grass establishment in exchange for the natural resources benefits," Bartel concluded. "But refining the system further, to ensure compatibility between the row crop and grass cover species, should largely minimize that penalty."

Bartel's field study began exploring one possible way to lessen the harm and increase the benefits of removing maize stover. Now future research can build on her work.

Corn with a cover of grass 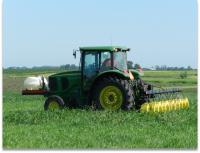