The maximum extent of Arctic sea ice in winter 2007 was the second lowest on satellite record, narrowly missing the 2006 record, according to a team of University of Colorado at Boulder researchers.

The Arctic sea-ice extent, which is the area of ocean covered by at least 15 percent ice, was 5.7 million square miles in March 2007, slightly higher than the record low of 5.6 million square miles measured in March 2006. The declining sea ice has been blamed on higher winter temperatures in the Arctic, a result of rising greenhouse gases in the atmosphere and strong natural variability in the ice, said researcher Walt Meier of CU-Boulder's National Snow and Ice Data Center.

"This year's wintertime low extent is another milestone in a strong downward trend," said Meier. "We're still seeing near-record lows (in sea ice) and higher-than-normal temperatures, and we expect this downward trend to continue in future years."

While researchers monitor Arctic sea ice year round, they pay special attention to the months of March and September because they generally mark the annual maximum and minimum sea-ice extents respectively for the year, Meier said. Sea ice usually stops growing, or recovering, from the summer melt each March.

A review study led by CU-Boulder research scientist Mark Serreze of NSIDC and published in Science last month indicated Arctic sea-ice extent trends have been negative for every month since 1979, when reliable satellite record-keeping efforts began. The September minimum measurements indicate the Arctic has been losing about 38,000 square miles of ice annually.

The researchers have been using satellite data from NASA, the National Oceanic and Atmospheric Administration and the U.S. Department of Defense, as well as data from Canadian satellites and weather observatories for their studies.

CU-Boulder's NSIDC is part of the Cooperative Institute for Research in Environmental Sciences, a joint venture of CU-Boulder and NOAA. For more information and for high-resolution graphics, visit the Web at http://nsidc.org/news/press/20070403_winterrecovery.html. 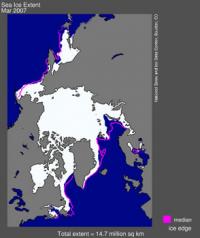