HOUSTON - (April 20, 2020) - If you're on skis, you want to avoid avalanches. But when the right kind happen in your brain, you shouldn't worry. You won't feel them. They're probably to your benefit.

Scientists at Rice University's Center for Theoretical Biological Physics (CTBP) have simulated the mechanics of a complex network that helps give neurons their ever-changing structures. They found the complex, Arp2/3, may be largely responsible for the "avalanches" observed in the cells' cytoskeletal networks.

The finding, published in the Proceedings of the National Academy of Sciences, provides another clue to how the brain forms and retains memories. It follows a study last year that detailed the interactions that allow neurons to accept the electrical signals that remodel their structures. An earlier study suggested actin filaments that control the shape of neurons may be the key to the formation and storage of long-term memories.

Much about the cytoskeleton in every cell remains a mystery, but neurons are particularly interesting to the research team that studies how they acquire information and store it for later use. Lego-like actin proteins assemble to form these spidery filaments that allow motor proteins to carry nutrients and other cargoes across cells. They also give cells the ability to move and divide.

Sometimes, these filaments form branched actomyosin networks that have been observed to collapse. The simulations revealed the presence of Arp2/3 is key to nucleating branched actin networks that occasionally convulse and release strain in the network. (Arp stands for actin-related protein.)

"There's an analogy I use," Wolynes said. "With memory, you have to have something that changes, then it has to remain relatively permanent, but then perhaps be able to change again.

"Suppose you have a pillow made up of a random array of feathers," he said. "They're basically rods, similar to the branched structure of actin. If you put your head on the pillow, you crush it down, and when you get up later it still has that same crushed shape. Another time, it could have a different shape. So it has memory."

Actin networks retain memory in somewhat the same way, Wolynes said. "Like your pillow, the rods in the network reconfigure when you put stress on them, in this case, an electrochemical signal input. When signaled, they undergo a series of avalanches that change the shape of the dendritic spine."

"These are also similar to earthquakes in a sense," Levine added. "In an earthquake, the ground is static for a long time and then you have a dramatic event that reconfigures things. This new configuration lasts for a long time.

"The novelty of what's being done here is that we're not just focusing on individual molecules, as we've often done in the past," he said. "We're figuring out how individual molecules and their properties can modulate structures at larger length scales."

The models showed branched actomyosin networks do not destabilize at specific concentrations, but that the avalanches depend on the initial configuration of the network as well as the history of past avalanches.

"Like your pillow, how flexible the network is depends on how often it has been compressed in the past," Wolynes said.

Cheung, whose lab continues to run three-dimensional MEDYAN models that combine mechanics and chemistry to study actomyosin dynamics, said many additional proteins are involved and are being studied by the team in order to understand memory.

The team hopes to tie its new findings to the earlier study led by Wolynes on how actin filaments exert force to stabilize long-term memories in prionlike fibers.

"One of the ways in which memory becomes more lasting is to change the global shape of the dendritic spine," Levine said. "That's not currently in our modeling framework, and it will be an extensive effort to get it to work, but I'm interested in how to extend these models to calculate how the shapes change."

Cheung is the Moores Professor of Physics, of Chemistry and of Computer Science at the University of Houston. Wolynes is the D.R. Bullard-Welch Foundation Professor of Science, Professor of Chemistry, BioSciences, and Physics and Astronomy at Rice and co-director of the CTBP.

This news release can be found online at https://news.rice.edu/2020/04/20/actin-avalanches-may-make-memories-stick/

These snapshots of actin filaments, motors and linkers show how a branched network changes during an avalanche as tension in the system, indicated by color, is released over 10 seconds. The blue squares at top left highlight concentrated high-tension regions that become low-tension areas (top right) after the event. Researchers suspect avalanches in the actomyosin networks in neuronal cells are one possible mechanism by which the brain preserves memories. (Credit: Memory/Plasticity Group at CTBP/Rice University)

An animated model shows the release of tension in a branched actomyosin network. Researchers suspect such avalanches are one possible mechanism by which the brain's neurons preserve memories. (Credit: Memory/Plasticity Group at CTBP/Rice University) 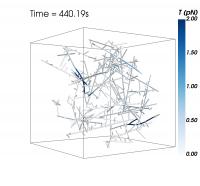