A long-sought-after black phosphous-structured (BP) nitrogen was synthesized by an international team co-led by Dr. Ho-Kwang Mao and Dr. Huiyang Gou from the Center for High Pressure Science and Technology Advanced Research (HPSTAR) and Prof. Yansun Yao from the University of Saskatchewan. This finding provides a firm base for exploring new type of high-energy-density nitrogen and a new direction of two-dimensional nitrogen. The results were recently published in Science Advances.

Graphene, or a single layer of graphite, has a set of novel properties that have attracted tremendous attention since its discovery. Nitrogen is the next neighbor to carbon in the periodic table of elements, so it is natural to question whether nitrogen can form a 2D material similar to graphene. It is not easy to imagine such a nitrogen layer because nitrogen has one more electron than carbon, overwhelming the bonding requirement of graphene. However, all elements in the VA group bar nitrogen do possess allotropes with layered structures similar to graphite but with the layers being buckled (Figure 1A). Phosphorene is a typical 2D material derived from the buckled honeycomb layers of black phosphorus. It exhibits a number of unusual electronic, mechanical, optical, and transport properties with great potential as a prototypical next-generation 2D material. Finding a BP-structured nitrogen means the synthesis of a nitrogen-based 2D material, or nitrogene, may become possible.

The rule of thumb for structural changes at high pressure is that elements at high pressure behave like the elements below them in the periodic table at lower pressures. As the first element of the VA group, nitrogen is right above phosphorus. Theoretical calculations have predicted the formation of BP-structured nitrogen at high pressure. However, it is much more challenging to transform nitrogen into a BP structure than the other VA elements because nitrogen forms N2 molecules with extremely strong triple chemical bonds. Even though nitrogen has been studied at pressures exceeding one million atmosphere (100 GPa), BP-structured nitrogen has never been reported until now.

"Analogous to the black, white, and red phosphorus allotropes, which have similar energies and can be mutually transformed, single-bonded nitrogen at high pressure may also have multiple polymorphs that are very close in energy. Although BP-structured nitrogen is not calculated to be the allotrope with the lowest energy, we think it may be synthesized as a metastable phase at particular pressure-temperature conditions," said Dr. Huiyang Gou, a co-team leader at the Center for High Pressure Science and Technology Advanced Research (HPSTAR) in Beijing.

The team used diamond anvil cell apparatus to exert formidable pressure onto molecular nitrogen; squeezing a tiny nitrogen sample between two opposite sharp diamond tips (Figure 1B), and subjecting it to very high temperatures by high-power laser heating. They explored a large pressure range from 1.2 to 1.9 million times normal atmospheric pressure, and saw the formation of a new nitrogen phase at approximately 1.5 million times normal atmospheric pressure and 1,900 degrees Celsius. The BP structure was identified using synchrotron-based single-crystal X-ray diffraction (XRD) techniques (Figure 1C), Raman spectroscopy (Figure 1D), and theoretical calculation. The new material exhibits an extraordinary set of optical properties associated with the anisotropy of the buckled layers, in particular, colossal Raman intensity compared to other nitrogen phases. The reason for the long-term absence of BP-structured nitrogen in high-pressure experiments is also explained through theoretical calculations. The BP-structured nitrogen transforms back to N2 gas when the pressure is lowered. Future studies are desirable to obtain metastable BP-structured nitrogen at ambient conditions.

"The discovery of BP-structured nitrogen is a typical showcase demonstrating the importance of fundamental scientific research at extreme conditions," added Dr. Ho-kwang Mao, director of HPSTAR. "Proving the existence of a material is the very first and essential step towards applications, which may demand years or even decades of continued research efforts." 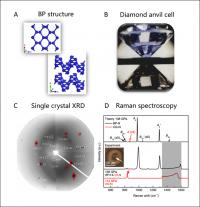