For many years astronomers have known that young 'protostars' drive supersonic jets of gas from their north and south poles. However, this is the first time that so many of them have been detected at once.

The results come from a five year survey undertaken with the UK Infra-Red Telescope and are expected to prompt significant changes in the understanding of the planetary nebulae population in the Galaxy, as well as the properties of jets ejected from young forming stars.

By examining images of excited hydrogen molecules at infrared wavelengths, scientists have been able to see through the gas and dust in the Milky Way in order to observe more distant targets. These targets are normally hidden from view and many of them have never been seen before.

The entire survey area covers approximately 1450 times the size of the full moon, or the equivalent of a 95 GigaPixel image. The survey reveals jets from protostars and planetary nebulae, as well as supernova remnants, the illuminated edges of vast clouds of gas and dust, and the warm regions that envelope massive stars and their associated clusters of smaller stars.

Based on current estimates using these data, the project expects to identify about 1000 unique jets from young stars - at least 90% of these are new discoveries – as well as 300 planetary nebulae, with almost half of them unknown.

Dr Dirk Froebrich of the University's Centre for Planetary Science said: 'These discoveries are very exciting. We will ultimately have much better statistics, meaning we will be able to investigate the physical mechanisms that determine the jet lengths, as well as their power. This will bring us much closer to answering some of the fundamental questions of star formation: How are these jets launched and how much energy, mass and momentum do they feed back into the surrounding interstellar medium.'

To mark the 5th anniversary of the start of the observations of the survey on 27 August, the project has released a number of images taken with the UK Infra-Red Telescope, based in Hawaii and used for the research.

The project has been led by Dr Dirk Froebrich from the Centre for Planetary Sciences at the University of Kent, in collaboration with Dr Chris J. Davis from the Astrophysics Research Institute at Liverpool John Moores University.

The survey team is made up of 40 people from institutions in the UK, Europe and worldwide.

Images: All images are generated by combining data with observations taken by UKIDSS. The images are false colour representation of the objects in the near infrared part of the spectrum and the three colour channels are represented by the following wavelength: Blue: broad band emission at 1.2micrometer; Green: broad band emission at 2.2micrometer; Red: Emission of molecular hydrogen at 2.122micrometer. Based on this colour-code, objects that contain hydrogen molecules emitting at 2.122micrometer appear very red. The colour of all other objects gives a rough indication of their temperature. Hotter objects appear bluer, while cooler objects are redder.

The area shown here was part of the very first image taken for the UWISH2 survey. It shows on the top a region of massive star formation (called G35.2N) with two spectacular jets. On the bottom an intermediate mass young stellar cluster (Mercer14) can be seen. Several jets are visible in its vicinity, as well as a region of photo-ionised material surrounding a young massive star.

This is a text-book example of triggered star formation. There is the outline of a molecular cloud, which is illuminated by ionising radiation of massive stars situated off the bottom of the image. The radiation pressure has compressed the cloud and started the process of star formation. The forming stars can be identified by reflection nebulae surrounding them, or by their jets. Models of the process of triggered star formation predict an age gradient of the forming stars with younger objects further inside, away from the source of the ionising radiation. The object shown here is a prime example that confirms this scenario with reflection nebulae ranging in colours from blue, near the tip of the molecular cloud, to green and yellow further inside. The colour change towards red indicates the objects are further embedded in their parental cloud core and thus younger. The youngest object is completely invisible even at these infrared wavelengths, and can only by identified by the jet it is launching (top of image).

This image shows a field that contains a newly discovered photogenic planetary nebulae. Internally dubbed by the research team as the 'Jelly-Fish PN' it shows an almost circular ring of emission from molecular hydrogen with a variety of structure in the ring itself and inside. The central ionising source responsible for the radiation is a white dwarf, which is too faint at the near infrared wavelengths to be visible in the image.

Established in 1965, the University of Kent – the UK's European university – now has almost 20,000 students across campuses or study centres at Canterbury, Medway, Tonbridge, Brussels, Paris, Athens and Rome.

In 2014 it received its second Queen's Anniversary Prize for Higher and Further Education.

The University is worth £0.6 billion to the economy of the South East, with its students contributing £211 million to that total, and directly or indirectly supports almost 6,800 jobs in the region (source: Viewforth Consulting 2009-10).

In the last Research Assessment Exercise, Kent placed 24th out of 159 UK institutions for its world-leading research, while 97% of its academic staff work in schools or centres where the research is rated as either internationally or nationally excellent.

Along with the universities of East Anglia and Essex, it is a member of the Eastern Arc Research Consortium. 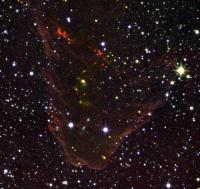