A joint team of scientists from Russia and the United States designed a method for marking dividing stem cells with three different labels. Until now, it was only possible to use two labels simultaneously. The new method will increase the accuracy and speed of stem cell division analysis and reveal new populations of stem cells. In the paper published as the cover story in Stem Cell Reports, the researchers demonstrated that triple labeling can be used to study the division of stem cells in the brain and other tissues. The research team, led by Grigori Enikolopov, was made up of specialists from the Moscow Institute of Physics and Technology (MIPT), Stony Brook University (USA), Cold Spring Harbor Laboratory (USA), and Koltzov Institute of Developmental Biology of the Russian Academy of Sciences. Part of the research was conducted at the National Research Center Kurchatov Institute.

A variety of tissues and organs, including the brain, harbor stem cells responsible for tissue renewal. Contrary to the popular belief that neurons do not regenerate, the adult brain has regions where so-called neurogenesis -- the formation of new neurons -- occurs. Neurogenesis is thought to be vital for learning and memory. It also plays a major role in responding to stress and repairing damaged nerve tissue. Usually, tissue regeneration proceeds in the following manner: After stem cells duplicate themselves, some of their offspring are used to restock the supply of stem cells, and some convert into other types of cells in order to repair the loss or damage. The process is not the same in all tissues. What the scientists aim to discover are the mechanisms common to all types of stem cells and the ways they can be influenced or improved.

As a stem cell duplicates itself, it goes through a stage called the S phase (see fig. 1) when DNA synthesis occurs and the chromosomes are duplicated. At that stage of the cell cycle, it is possible to label the new strands of DNA by supplying the cells with a tagged building block (a nucleotide), which becomes part of the new DNA. Moreover, when such cells have divided and reproduced, their daughter cells will also be labeled. Scientists can then examine the tissue using fluorescent antibodies to see the cells with or without the labeled DNA and follow the fate of these two populations. Combinatorially, if nucleotides with two different tags are used, the number of differently labeled cell populations raises to eight. Using nucleotides with three different tags increases that number to 128.

Even though such nucleotides with three or more different tags are available, scientists have had a difficult time distinguishing between them and their combinations in cells that have undergone duplication. This mainly happens because the antibodies are not perfect and can bind not only with their intended targets but also with similar ones.

If that happens and both tags are labeled with the same antibody, it becomes impossible to differentiate one from another. Scientists decided to add another tag, which can be recognized not by applying antibodies but by using the so-called click chemistry -- that is, adding a fluorescent coloring agent to a chemical reaction. The main difficulty was that in triple labeling the chemical colorant left certain spots uncolored and those spots were reacting with antibodies, creating a false signal. As a result, it was not possible to distinguish between the three labels. Nevertheless, the researchers came up with a way of sealing those areas by adding a colorless substance related to the original agent and making them inaccessible to the antibodies.

In this paper, the scientists succeeded in unambiguously and quantitatively separating the labels' signals and revealing the normally overlooked groups of stem cells with unusual features. The researchers employed the triple labeling technique to analyze stem cells in the brain, the intestine, and testis, using additional tricks to effectively expand the technique to quadruple labeling of dividing stem cells. The analysis of the intestine cells (see fig. 2) is particularly illustrative: Providing different labels 24 hours apart revealed that cohorts of stem cells born at that time and their progeny spread out along the villi -- fingerlike projections in the intestine.

In addition, triple labeling helped identify new key parameters of neurogenesis with great precision (see the animation). As a result, the authors of the paper were able to design a tool for studying stem cells in any given tissue that reveals new features of stem cells and surpasses the previously available techniques in accuracy. It also speeds up and simplifies the research procedure.

Oleg Podgorny, a senior research scientist at MIPT's Laboratory of Brain Stem Cells and one of the authors of the paper, comments on the study: "We have been extensively using triple labeling in neurogenesis analysis in mice under a variety of conditions, such as behavioral tests, special dietary regimen, and exposure to radiation and drugs used for medical treatments, including those for anti-neoplastic therapy. Also, we have been applying the method to check how the drugs for nervous system diseases, especially Alzheimer's, influence neurogenesis. Patients with Alzheimer's disease experience problems with memory and cognitive skills, and so far we have collected a significant body of data proving that neurogenesis is crucial to these brain functions." 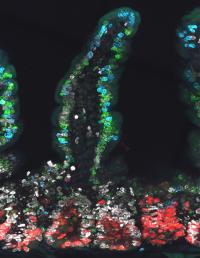